Can somebody explain me why this two approaches give different results? Which of approaches is better to use and why?

The two-sample t-test is appropriate here, because you want to compare the two groups directly.

Two groups can differ significantly, and yet the CIs can still overlap. However, if the CIs do not overlap, then the groups must differ significantly. (This is of course assuming that the significance test and the CIs are calculated using the same assumptions about the data.) This is commonly misunderstood. Reference: http://blog.minitab.com/blog/real-world-quality-improvement/common-statistical-mistakes-you-should-avoid

How can the means of two groups differ significantly and yet have overlapping CIs? Loosely speaking, I think of it this way. There is 95% likelihood that the true mean for each group lies within the CI for that group. But in order for them to have the same mean, one group mean would lie at the extreme of its CI, and the other group mean would lie at the opposite extreme of its CI. That is an unlikely scenario. 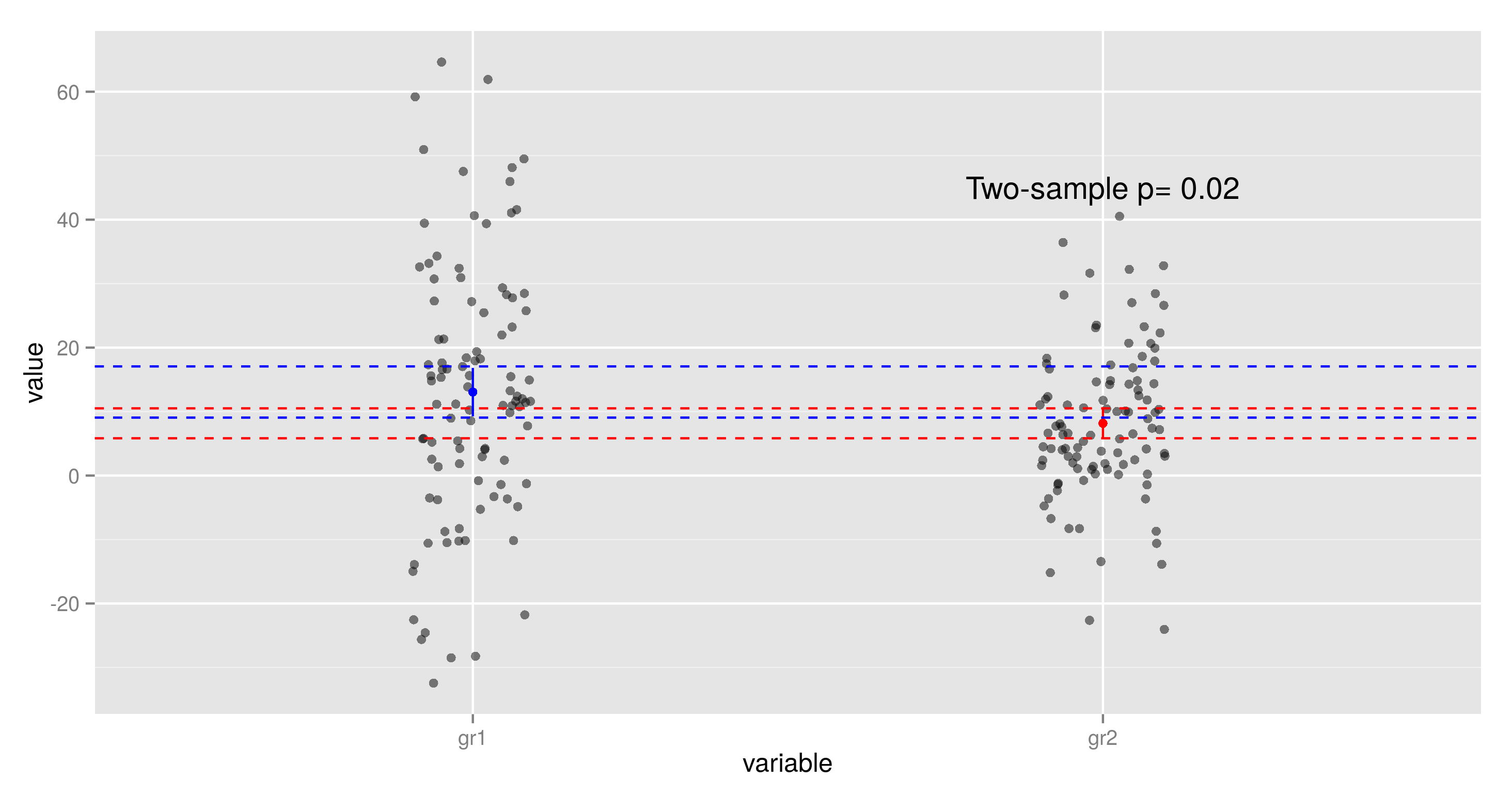 but this wouldn't be correct, because you would be treating the mean of group 2 as a fixed value (no variation). So, the appropriate test would be the two-sample t-test, in which you account for variation in both populations. In the two-sample you are testing to see if the difference of the means is significantly different than 0, or since you selected greater, to see if difference is significantly greater than 0. With the Looking at this data, that might not be apparent, since the means are quite close and the populations are variable.

The 95% confidence interval about the mean is simply saying, "if we run this experiment 100 times, we expect this interval to contain the population mean 95 times." There is no probability or likelihood of the population mean taking on different values within the interval, because it is not a random variable, it is assumed to be fixed.

Not the answer you're looking for? Browse other questions tagged r or ask your own question.

8
Two-sample one-sided Kolmogorov-Smirnov test vs one-sided Wilcoxon-Mann-Whitney test
5
Output of one-tailed Wilcoxon sign rank test in R
0
How to test difference from 50%
0
Two sample T test results
4
Inconsistent results with median test (Coin-package) R
0
Different results with repeated measure correlation (rmcorr) and cor.test
2
Do we assume a t distribution for the estimate of the difference of normal distributions?
0
What's the right t-test for comparing the distribution of a response variable across two categories for the same sample?
0
p value of 1 for Mann-Whitney U - artifact of R?