Using linear regression for count data - will this introduce bias?

Say I am fitting a model to Poisson count data, but I am only interested in estimating the mean of the count variable. I understand a ordinary linear regression is a good approximation when the Poisson mean is large (see Why is Poisson regression used for count data?), but I am interested in zero inflated Poisson models with small means.

I constructed a toy example, and fitted two OLS models: one to $Y \sim X$ and one to $\mu \sim X$. The two models seem to have similar coefficients, and I didn't find a statistically significant difference when repeating many times. I also tried a zero inflated Poisson version.

Mathematically speaking, am I introducing any bias by doing this? (I understand OLS will not give the same result as Poisson regression due to the variable transformation. Eventually I want to use an arbitrary positive valued function, e.g. a random forest.)

A couple of points: 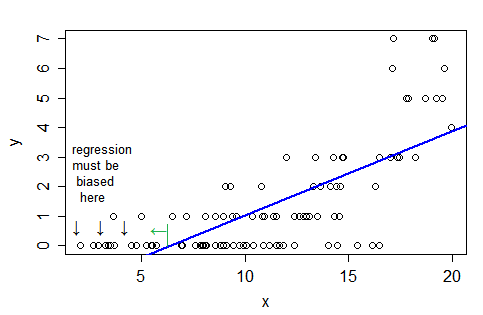 Not the answer you're looking for? Browse other questions tagged regression least-squares count-data poisson-regression or ask your own question.