Whether the moments of a stochatic proces are finite or infinite/not existent, does not fully determine the "behavior" of a time series, presumably along the time dimension.

The standard example of a distribution with moments which some are infinite and some do not exist, is the Cauchy distribution, and it has already been mentioned. Assume now that a time series is a sequence of identically and independently distributed Cauchy random variables. More over, assume the existence of another time series, independent of the first which is comprised of i.i.d. Logistic random variables with scale parameter $2$ and location parameter $0$. Both are strictly stationary processes, the first has the "infinite/undefined moments" issue, while for the Logistic process, the moments exist. An indicative graph of a realization of the two is 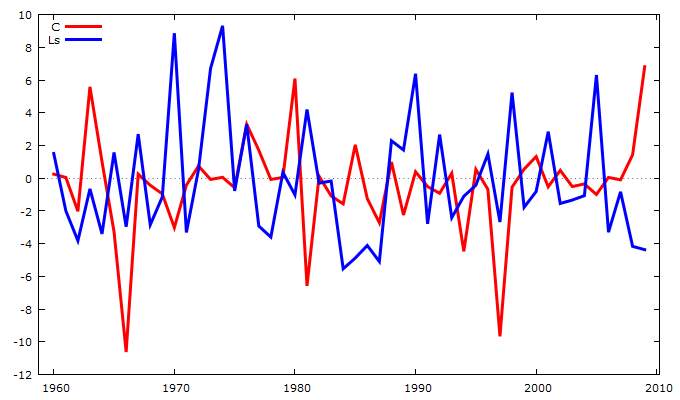 where the red line is the Cauchy process, and the blue line is the Logistic process. One can see that the Cauchy does not exhibit a behavior that "betrays" the fact that it has infinite/undefined moments.

The lesson here is that the moments are a specific way to summarize/quantify fundamental properties of a distribution, like its location and its variability. These are more primitive concepts than the moments.

So for example if the moments do not exist, this does not mean that the concept of "location" is also undefined. A strictly stationary process, will have a constant location point. When this point cannot be described by a moment, it can be described for example by the use of the median of the distribution.

Then, let us define a time series (stochastic process) $X$ where $X_k$ follows the Cauchy distribution with scale $1$ for all $k$ and the $X_k$s are mutually independent. This process is strictly stationary (any joint distribution is just a joint distribution of independent Cauchy random variables and thus does not depend on shifting the time index). On the other hand, this process does not satisfy the conditions weakly stationarity - the mean and autocovariance do not stay constant since they do not exist.

Not the answer you're looking for? Browse other questions tagged time-series moments or ask your own question.

127
Why does the Cauchy distribution have no mean?

7
Why is this time-series stationary?
2
Why does an (Augmented) Dickey Fuller test apply in an ARMA situation when it (seems to) assume an $AR(p)$ situation?
2
Stationary Time Series (Conditional moments)