I'm getting wrapped around data types and I need some help:

If you look at the picture above (taken from here), it has the data types like this:

But if you look at this next picture (from here), the categories are:

One picture has NOB under Qualitative, the other has it under Quantitative. Which one is correct?

These typologies can easily confuse as much as they explain.

For example, binary data, as introduced in many introductory texts or courses, certainly sound qualitative: yes or no, survived or died, present or absent, male or female, whatever. But score the two possibilities 1 or 0 and everything is then perfectly quantitative. Such scoring is the basis of all sorts of analyses: the proportion female is just the average of several 0s for males and 1s for females. If I encounter 7 females and 3 males, I can just average 1, 1, 1, 1, 1, 1, 1, 0, 0, 0 to get the proportion 0.7. With binary responses, you have a wide open road then to logit and probit regression, and so forth, which focus on variation in the proportion, fraction or probability survived, or something similar, with whatever else controls or influences it. No one need get worried by the coding being arbitrary. The proportion male is just 1 minus the proportion female, and so forth.

Almost the same is true when nominal or ordinal data are being considered, as any analyses of such data hinge on first counting how many fall into each category and then you can be as quantitative as you like. Pie charts and bar charts, as first encountered in early years, show that, so it is puzzling how many accounts miss this in explanations.

Put another way, you can classify raw or original data as first reported and as appearing in say the cell of a spreadsheet or database. But its original form is not immutable. Imagine something stark like a death from puzzlement from reading too many superficial textbooks. That can be written on a certificate, but statistical analysis never stops there. There is an aggregation to counts (how many such deaths in a area and a time period), a reduction to rates (how many relative to the population at risk), and so on.

So, how the data are first encoded rarely inhibits their use in other ways and transformation to other forms. The etymology of data is here revealing: translating the original Latin literally, they are as given to you, but there is no rule against converting them to many other forms.

All, I couldn't find one picture that put everything together, so I made one based on what I have been studying. Putting the scales of measurement on the same diagram with the data types was confusing me, so I tried to show that there is a distinction there. 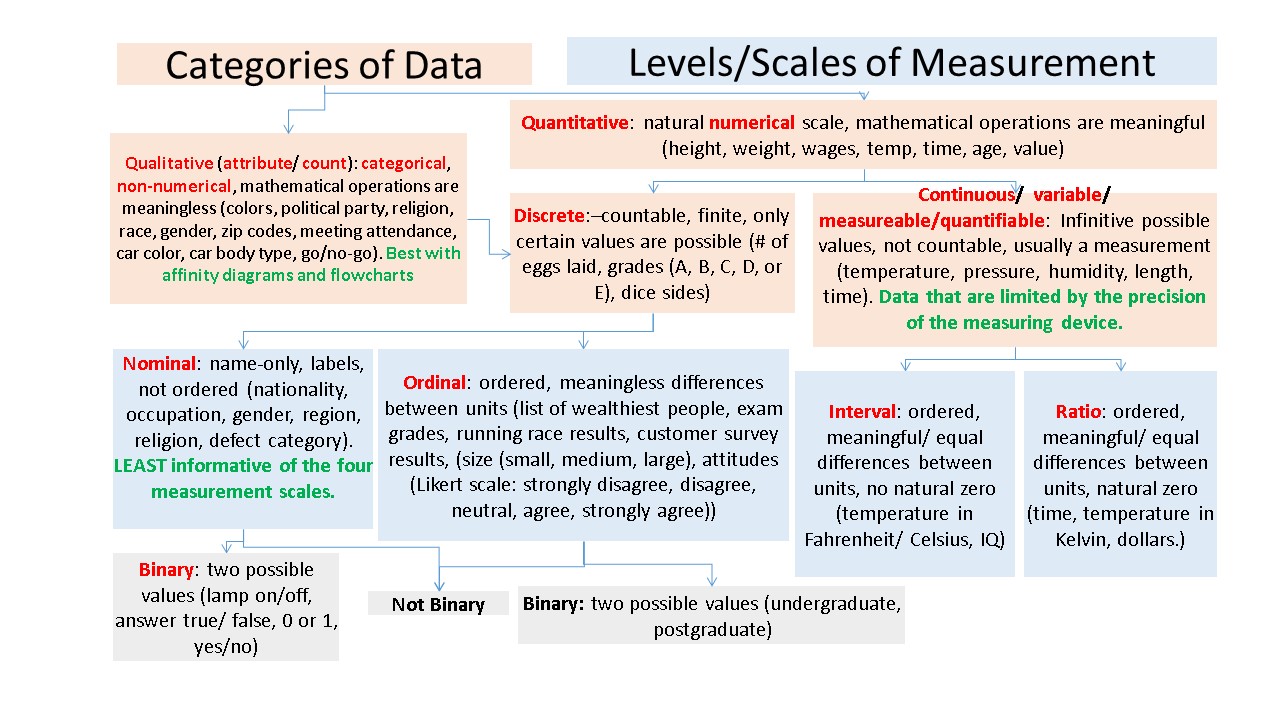 I appreciate your help and thoughts! Regards, Leaning

I think the two sites you cite are using the terms differently. Suppose, for example, you ask people:

What sort of data is this? The variable is nominal: It's only names, there is no order to it. But many people would call it quantitative because the key thing is how many choose which candidate. That's as opposed to qualitative data which might be transcriptions of interviews about what they like best about Obama (or Romney or whoever).

Neither of these charts are correct. They are rather nonsensical and you are right to be confused (aside from the contradiction).

They seem to be conflating the ideas of fundamental variable type and variable selection to model a system (with a pdf).

There are 3 fundamental variable types (excluding subtypes): Nominal (categorical/qualitative), Ordinal, and Continuous (Numeric, Quantitative). Ordinal has both a qualitative and quantitative nature.

Attribute is not really basic type but is usually discussed in that way when choosing an appropriate control chart, where one is choosing the best pdf with which to model the system. This is sometimes called "attribute data", but it's type is nominal (aka categorical etc). Like Nick mentioned, we count nominals, so it can be confused with a numeric type, but its not.

I found this question while searching about levels of measurement and related concepts. I think the charts in the question lack the context. When we do the categorization we define the rules for grouping the objects according to our purpose. So what is the purpose? And are we talking about the variables?

We could categorize variables according to the levels of measurement, then we could have 4 scales (groups) with the following rules:

And this is only one approach from Stanley Smith Stevens. There are several other typologies.

Continuous and discrete variables are mathematical concepts where we have a range of real numbers and:

Not the answer you're looking for? Browse other questions tagged categorical-data dataset ordinal-data binary-data or ask your own question.

2
Levels of measurement and discrete vs continuous random variables

8
Factor analysis on mixed (continuous/ordinal/nominal) data?
6
Are all attributes/data points inherently nominal?
3
How to test the inter-rater reliability of a nominal coding process that generates ordinal data?
1
How can I combine nominal with ordinal data to build a unique variable?
3
Is the month ordinal or nominal variable?
3
Different Types of Data
1
Which regression is useable for an ordinal dependent and multiple discrete/ordinal/binary independent variables?