Difference in Difference method: how to test for assumption of common trend between treatment and control group?

Following a comment from a previous thread, I want to know how one can test for the assumption of common trend between the treatment and control group in the Difference in Difference method?

Edited: After posting this question, the "related" panel leads me to this unanswered question, in which the asker wanted to understand intuitions behind a method to account for time trends in DID method. I want to link it here as that question is very interesting to me too. Thank you! 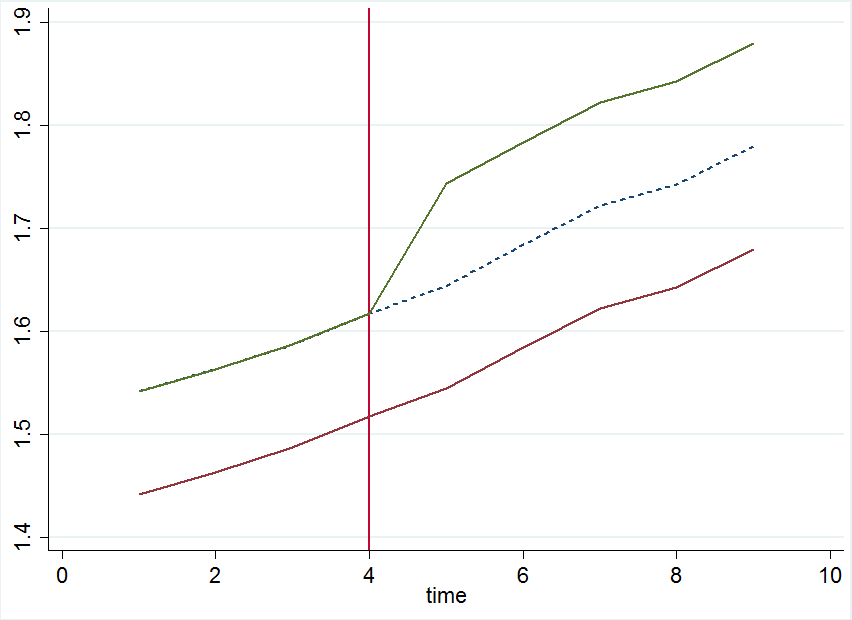 This graph was taken from a previous answer to the question why we need the common trends assumption. This includes also an explanation of the blue-dashed line which is the counterfactual outcome for the treated that can be assumed if we can reasonably verify the parallel trends assumption.

where $y$ is the outcome for individual $i$ at time $t$, $\lambda$ and $\delta$ are individual and time fixed effects (this is a generalized way of writing down the diff-in-diff model which also allows for multiple treatments or treatments at different times).

An attractive feature of this test is that also the interactions of the time dummies after the treatment with the treatment indicator is informative. For instance, $\beta_{1}, \beta_2, \beta_3$ show you whether the treatment effect fades out over time, stays constant, or even increases. An application of this approach is Autor (2003).

Note that the literature generally refers to $\beta_{-2}, \beta_{-1}$ as "leads" and $\beta_{1}, \beta_2, \beta_3$ as "lags", even though they are merely interactions of the treatment indicator with time dummies and are not actually leads and lags of the treatment indicator in a time-series jargon sense. A more detailed explanation of this parallel trends test is provided in the lecture notes by Steve Pischke (here on page 7, or here on page 9).

There is a good manner to verify if the pre-trend common assumption is reasonable in a difference-in-difference framework with two time and two periods. But is necessary to have some data for more than one pre-treatment period (Sometimes, the DiD with two periods performs better than the DiD with multiple periods).

Considering your example, you can run a DiD with the period of 2002 like a post-treatment and another pre treatment period (Suppose 2001). If the ATT be statistically significant its an evidence against the pre-trend common assumption, in other words, in the period of 2001-2002 the effect was already happening.

The following papers use this approach: