Accounting for overdispersion in binomial glm using proportions, without quasibinomial

I am doing binomial GLM using relative abundance, for example: model<-glm(cbind(number_pres,number_abs)~Var1+Var2+Var3+Var4..., family=binomial, data=Data). My sample size is about 700, and I have about 15 explanatory variables. I can't use Poisson because the total number of "trials" varies per sample point (relative abundance account for this), and I'd prefer not to simplify to presence/absence.

My global model is overdispersed (residual deviance/ degrees of freedom = 2.8), and has some funny patterns in the residuals (see below). 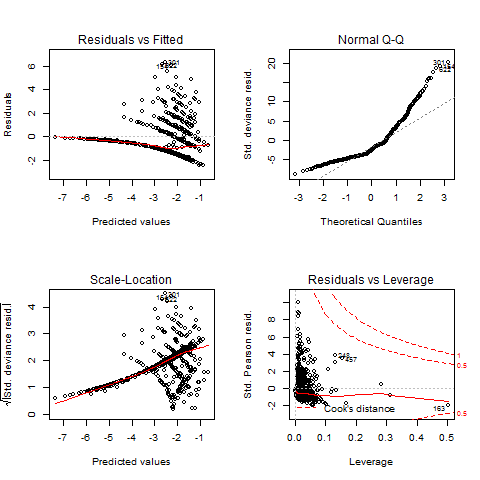 The overdispersion remains whether I add interactions, polynomials, transform variables, remove influential points, remove variables which had VIF ~4 (the highest VIF of the set). Removing the influential point and the highest VIF does seem to help with the residual patterns, but not overdispersion. I can use family=quasibinomial, but then of course many of the variables are no longer significant, and I find this harder to interpret/understand. If possible I'd like to just fix the overdispersion.

Two things I suspect may be causing issues are the high number of zeros in my species data, and something to do with spatial autocorrelation. I did a few tests and spatial autocorrelation of residuals might be a minor issue (in "car" Durbinwatsontest showed reject null of no autocorrelation, but in "gstat" variogram the semivariance hovered around 2-2.5). I repeated the model using presence/absence in a bernouilli glm (overdispersion doesn't exist for bernouilli), there are no residual patterns, and I get similar results when using a zero-inflated binomial glm (package glmmADMB). I have yet to find a zero-inflated model for binomial glm with proportions, but maybe this indicates that zeros aren't the problem either.

Should I just use quasibinomial glms for my model, and the subsequent nested model set? Or is there a solution I am missing?

Overdispersion occurs for a number of reasons, but often the case of presence/absence data is because of clustering of observations and correlations between observations.

"Generally speaking, a random effects model is appropriate if the observed clusters may be regarded as a random sample from a (large, possibly infinite) pool of possible clusters. The observed clusters are of no practical interest per se, but the distribution in the pool is. Or this distribution is regarded as a nuisance that needs to be controlled for."

Not the answer you're looking for? Browse other questions tagged generalized-linear-model binomial-distribution autocorrelation overdispersion quasi-binomial or ask your own question.

4
Spatial autocorrelation -- GLM, autocovariate, MEM (Moran's eigenvector mapping)
6
Perfect separation error message for glm with binomial but not with quasibinomial family
6
How to account for overdispersion in a glm with negative binomial distribution?
8
GLM for proportional data and underdispersion
4
How do you deal with overdispersion in a zero-inflated negative binomial regression AND when you expect data to have zeros?
5
Why GLM Poisson model predict negative value for count data?
0
What better I use for Negative Binomial Regression with library(MASS) glm(family=negative.binomial) or glm.nb?