Median of ratio of independent variates with Beta distributions

I've computed several $pdf$'s of the distribution of $Z$ (for varying Beta's) using a formula from a paper I found and paid for online, and have discovered to my dismay that the median of $Z$ is $1$.

I would love to submit my code but don't want to give away this formula because it costs \$48, but let's just say I am very sure there are no errors in it. For one thing, the area under the curve on $(0,\infty)$ is approximately $1$ (within 1e-8 according to Python's scipy.integrate.quad function) when I test several values for $\alpha_i,\beta_i$.

My question is: Is this correct? Expected? Obvious even? Possibly obvious from the [hidden] formula which I'd assume most academics have access to?

As I mentioned in comments, I don't believe the claim in your question (that the median of the ratio of two beta variates is 1); I expect there's some omitted detail. 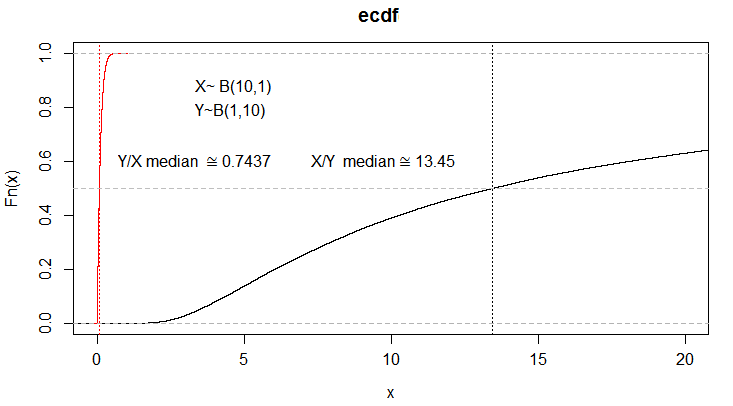 Not the answer you're looking for? Browse other questions tagged probability distributions python beta-distribution scipy or ask your own question.