What's the difference between logistic regression and perceptron?

The notes introduce us to logistic regression and then to perceptron. While describing Perceptron, the notes say that we just change the definition of the threshold function used for logistic regression. After doing that, we can use the Perceptron model for classification.

So my question is - if this needs to be specified and we consider Perceptron as a classification technique, then what exactly is logistic regression? Is is just used to get the probability of a data point belonging to one of the classes?

The hypothesis in logistic regression provides a measure of uncertainty in the occurrence of a binary outcome based on a linear model. The output is bounded asymptotically between $0$ and $1$, and depends on a linear model, such that when the underlying regression line has value $0$, the logistic equation is $0.5 = \frac{e^0}{1+e^0}$, providing a natural cutoff point for classification purposes. However, it is at the cost of throwing out the probability information in the actual result of $h(\Theta^T\bf x) =\frac{e^{\Theta^T \bf x}}{1 +e^{\Theta^T\bf x}}$, which often is interesting (e.g. probability of loan default given income, credit score, age, etc.).

The perceptron classification algorithm is a more basic procedure, based on dot products between examples and weights. Whenever an example is misclassified the sign of the dot product is at odds with the classification value ($-1$ and $1$) in the training set. To correct this, the example vector will be iteratively added or subtracted from the vector of weights or coefficients, progressively updating its elements: 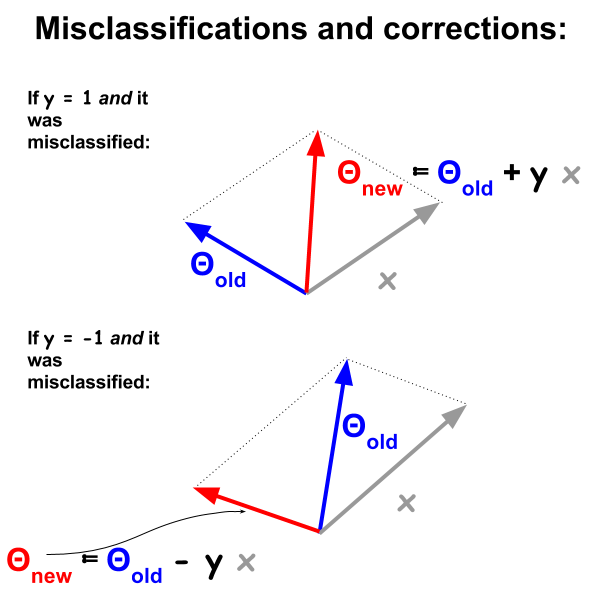 Vectorially, the $d$ features or attributes of an example are $\bf x$, and the idea is to "pass" the example if:

The threshold will be absorbed into the bias coefficient, $+ \theta_0$. The formula is now:

I have been working on the differences between these two methods in a dataset from the same course, in which the test results in two separate exams are related to the final acceptance to college:

The decision boundary can be easily found with logistic regression, but was interesting to see that although the coefficients obtained with perceptron were vastly different than in logistic regression, the simple application of the $\text{sign}(\cdot)$ function to the results yielded just as good a classifying algorithm. In fact the maximum accuracy (the limit set by linear inseparability of some examples) was reached by the second iteration. Here is the sequence of boundary division lines as $10$ iterations approximated the weights, starting from a random vector of coefficients: 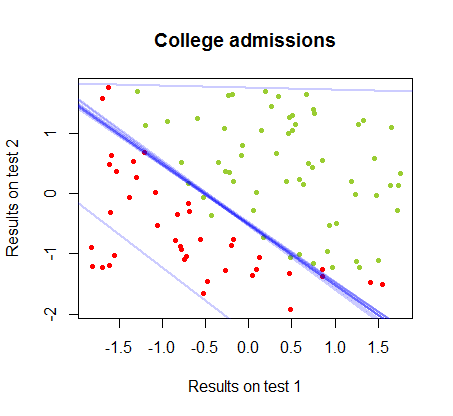 The accuracy in the classification as a function of the number of iterations increases rapidly and plateaus at $90\%$, consistent how fast a near-optimal decision boundary is reached in the videoclip above. Here is the plot of the learning curve: 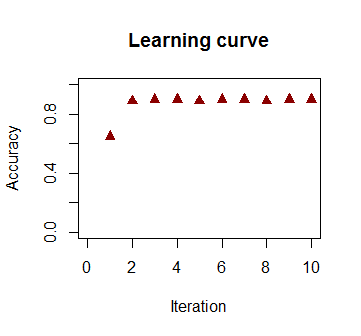 The code used is here.

In some cases, the term perceptron is also used to refer to neural networks which use a logistic function as a transfer function (however, this is not in accordance with the original terminology). In that case, a logistic regression and a "perceptron" are exactly the same. Of course, with a perceptron it is possible to use multiple neurons all using a logistic transfer function, which becomes somewhat relatable to stacking of logistic regression (not the same, but similar).

Suppose that our training observations are the feature vectors $x_1,\ldots, x_N \in \mathbb R^n$, and the corresponding labels are $y_1,\ldots,y_N \in \{-1, 1 \}$. For notational simplicity, let's append a $1$ to the end of each vector $x_i$. The perceptron algorithm can be interpreted as using stochastic subgradient descent to solve the optimization problem \begin{align} \tag{1}\text{minimize} & \quad \frac{1}{N}\sum_{i=1}^N \max(-y_i\beta^T x_i,0). \end{align} The optimization variable is $\beta \in \mathbb R^{n+1}$. From this perspective, the difference between the perceptron algorithm and logistic regression is that the perceptron algorithm minimizes a different objective function. (The derivation of logistic regression via maximum likelihood estimation is well known; in this post I'm focusing on the interpretation of the perceptron algorithm.)

They're both applying regression by estimating the parameters of the same logistic-transformed model. According to the properties of convex functions, the values of the parameters will be the same any way you choose to estimate them. To quote myself from a previous answer:

Logistic regression models a function of the mean of a Bernoulli distribution as a linear equation (the mean being equal to the probability p of a Bernoulli event). By using the logit link as a function of the mean (p), the logarithm of the odds (log-odds) can be derived analytically and used as the response of a so-called generalised linear model. On top of prediction, this allows you to interpret the model in causal inference. This is something that you cannot achieve with a linear Perceptron.

The Perceptron, takes the inverse logit (logistic) function of wx, and doesn't use probabilistic assumptions for neither the model nor its parameter. Online training will give you exactly the same estimates for the model weights/parameters, but you won't be able to interpret them in causal inference due to the lack of p-values, confidence intervals, and well, an underlying probability model.

Andrew Ng used the term "logistic regression" as a model for solving the binary classification problem.

As you may saw in the paper he actually never draw the model itself.

Let me add few details to the bucket so you may find the reasoning on how I think he constructed the lectures.

The model used for the "logistic regression" is a single level perception with with custom number of inputs and one output ranging from 0 to 1.

This is exactly the model Andrew Ng is using since that function ranges from 0 to 1.

For the error function he uses L2, although in some papers he may use some other function for that.

Personalty, I would use simpler model with the ReLU function to explain the SLP (single level perceptron) since it is more used today.

Not the answer you're looking for? Browse other questions tagged regression machine-learning self-study logistic perceptron or ask your own question.

3
Differences Between Logistic Regression in Statistics and in Machine Learning
21
From the Perceptron rule to Gradient Descent: How are Perceptrons with a sigmoid activation function different from Logistic Regression?
2
Deriving Linear Regression update rule: Why do we set the derivative of cost funtion to 0 to minimize it?
1
Is my understanding of Generalized Linear Models correct?
1
What methods are used to solving regression problems in Machine Learning (like GLMs)?
5
Softmax regression: Intuition about why distribution of $y$ is in terms of $e^{\theta^Tx}$ as opposed to just $\theta^Tx$
9
The correct loss function for logistic regression
1
What does Penalize a learning algorithm mean in Machine Learning?