Why is Pearson's ρ only an exhaustive measure of association if the joint distribution is multivariate normal?

This assertion was raised in the top response to this question. I think the 'why' question is sufficiently different that it warrants a new thread. Googling "exhaustive measure of association" did not produce any hits, and I'm not sure what that phrase means.

It might be best to understand "measure of association" in a multivariate distribution to consist of all properties that remain the same when the values are arbitrarily rescaled and recentered. Doing so can change the means and variances to any theoretically allowable values (variances must be positive; means can be anything).

The correlation coefficients ("Pearson's $\rho$") then completely determine a multivariate Normal distribution. One way to see this is to look at any formulaic definition, such as formulas for the density function or characteristic function. They involve only means, variances, and covariances--but covariances and correlations can be deduced from one another when you know the variances.

The multivariate Normal family is not the only family of distributions that enjoys this property. For example, any Multivariate t distribution (for degrees of freedom exceeding $2$) has a well-defined correlation matrix and is completely determined by its first two moments, also.

Variates can be associated in ways that the Pearson correlation is completely blind to.

In the multivariate normal, the Pearson correlation is "exhaustive" in the sense that the only association possible is indexed by $\rho$. But for other distributions (even those with normal margins), there can be association without correlation. Here's a couple of plots of 3 normal random variates (x,y and x,z); they're highly associated (if you tell me the value of the $x$-variate, I'll tell you the other two, and if you tell me the $y$ I can tell you the $z$), but they are all uncorrelated.

Here's another example of associated but uncorrelated variates: 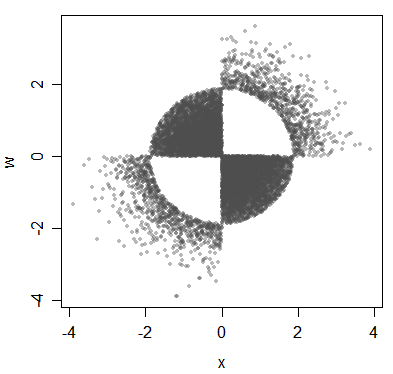 (The underlying point is being made about distributions, even though I'm illustrating it with data here.)

So the Pearson correlation doesn't "exhaust" the ways in which variates are associated -- they can be associated but uncorrelated, or they can be correlated but associated in quite distinct ways. [The variety of ways in which association not entirely captured by correlation can happen is quite large -- but if any of them happen, you can't have a multivariate normal. Note, however, that nothing in my discussion implies that this (that knowing $\rho$ defines the possible association) characterizes the multivariate normal, even though the title quote seems to suggest it.]

(A common way to address multivariate association is via copulas. There are numerous questions on site that relate to copulas; you may find some of them helpful)

144
Pearson's or Spearman's correlation with non-normal data
47
Why zero correlation does not necessarily imply independence
7
Relation between covariance and joint distribution
3
Where does the argument "Pearson's correlation coefficient assumes normality" come from?