Testing for linear dependence among the columns of a matrix

My hypothesis is that at least one security is linearly dependent on other securities. Is there a function in R that sequentially tests each column a matrix for linear dependence?

For example, one approach would be to build up a correlation matrix one security at a time and calculate the determinant at each step. When the determinant = 0 then stop as you have identified the security who is a linear combination of other securities.

Any other techniques to identify linear dependence in such a matrix are appreciated.

You seem to ask a really provoking question: how to detect, given a singular correlation (or covariance, or sum-of-squares-and-cross-product) matrix, which column is linearly dependent on which. I tentatively suppose that sweep operation could help. Here is my probe in SPSS (not R) to illustrate.

Let's create some linear dependancy between V2, V4 and V5:

So, we modified our column V4.

The printouts of M in 5 iterations:

That's how we knew which column is linearly tied with which other. I didn't check how helpful is the above approach in more general case with many groups of interdependancies in the data. In the above example it appeared helpful, though.

Here's a straightforward approach: compute the rank of the matrix that results from removing each of the columns. The columns which, when removed, result in the highest rank are the linearly dependent ones (since removing those does not decrease rank, while removing a linearly independent column does).

The question asks about "identifying underlying [linear] relationships" among variables.

The quick and easy way to detect relationships is to regress any other variable (use a constant, even) against those variables using your favorite software: any good regression procedure will detect and diagnose collinearity. (You will not even bother to look at the regression results: we're just relying on a useful side-effect of setting up and analyzing the regression matrix.)

(There is an art and quite a lot of literature associated with identifying what a "small" loading is. For modeling a dependent variable, I would suggest including it within the independent variables in the PCA in order to identify the components--regardless of their sizes--in which the dependent variable plays an important role. From this point of view, "small" means much smaller than any such component.)

Let's look at some examples. (These use R for the calculations and plotting.) Begin with a function to perform PCA, look for small components, plot them, and return the linear relations among them.

Let's apply this to some random data. These are built on four variables (the $B,C,D,$ and $E$ of the question). Here is a little function to compute $A$ as a given linear combination of the others. It then adds i.i.d. Normally-distributed values to all five variables (to see how well the procedure performs when multicollinearity is only approximate and not exact).

We're all set to go: it remains only to generate $B, \ldots, E$ and apply these procedures. I use the two scenarios described in the question: $A=B+C+D+E$ (plus some error in each) and $A=B+(C+D)/2+E$ (plus some error in each). First, however, note that PCA is almost always applied to centered data, so these simulated data are centered (but not otherwise rescaled) using sweep.

Here we go with two scenarios and three levels of error applied to each. The original variables $B, \ldots, E$ are retained throughout without change: only $A$ and the error terms vary. 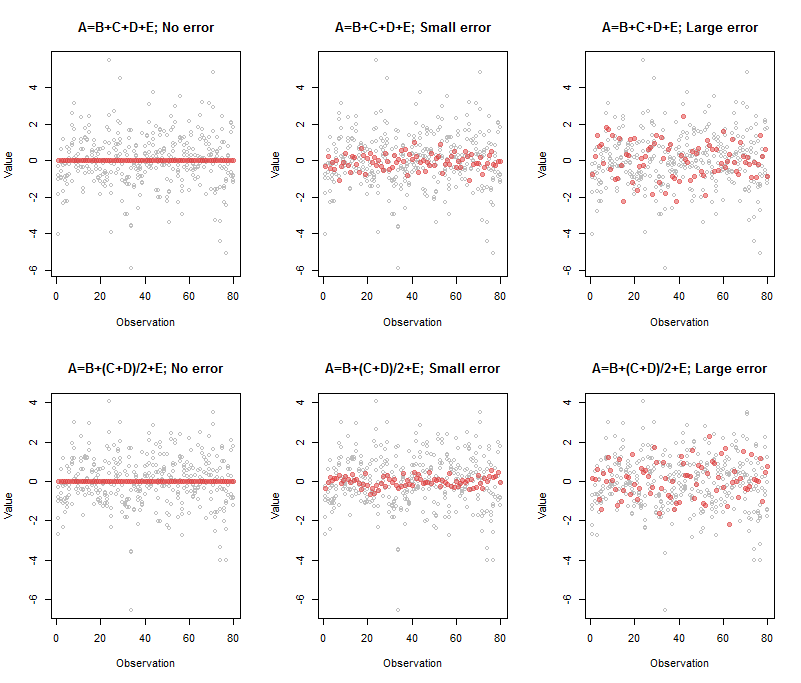 The output associated with the upper left panel was

This says that the row of red dots--which is constantly at $0$, demonstrating a perfect multicollinearity--consists of the combination $0 \approx A -B-C-D-E$: exactly what was specified.

The output for the upper middle panel was

The coefficients are still close to what we expected, but they are not quite the same due to the error introduced. It thickened the four-dimensional hyperplane within the five-dimensional space implied by $(A,B,C,D,E)$ and that tilted the estimated direction just a little. With more error, the thickening becomes comparable to the original spread of the points, making the hyperplane almost impossible to estimate. Now (in the upper right panel) the coefficients are

They have changed quite a bit but still reflect the basic underlying relationship $A' = B' + C' + D' + E'$ where the primes denote the values with the (unknown) error removed.

The bottom row is interpreted the same way and its output similarly reflects the coefficients $1, 1/2, 1/2, 1$.

In practice, it is often not the case that one variable is singled out as an obvious combination of the others: all coefficients may be of comparable sizes and of varying signs. Moreover, when there is more than one dimension of relations, there is no unique way to specify them: further analysis (such as row reduction) is needed to identify a useful basis for those relations. That's how the world works: all you can say is that these particular combinations that are output by PCA correspond to almost no variation in the data. To cope with this, some people use the largest ("principal") components directly as the independent variables in the regression or the subsequent analysis, whatever form it might take. If you do this, do not forget first to remove the dependent variable from the set of variables and redo the PCA!

Here is the code to reproduce this figure:

(I had to fiddle with the threshold in the large-error cases in order to display just a single component: that's the reason for supplying this value as a parameter to process.)

User ttnphns has kindly directed our attention to a closely related thread. One of its answers (by J.M.) suggests the approach described here.

I ran into this issue roughly two weeks ago and decided that I needed to revisit it because when dealing with massive data sets, it is impossible to do these things manually.

I created a for() loop that calculates the rank of the matrix one column at a time. So for the first iteration, the rank will be 1. The second, 2. This occurs until the rank becomes LESS than the column number you are using.

I am sure that you can add an if statement, I don't need it yet because I am only dealing with 50ish columns.

Not that the answer @Whuber gave really needs to be expanded on but I thought I'd provide a brief description of the math.

Not the answer you're looking for? Browse other questions tagged r correlation pca linear-model svd or ask your own question.

5
How to identify which variables are collinear in a singular regression matrix?
6
Identifying linear relationships among many interrelated variables
-1
How to get Linear dependent columns indices in big dataset?
0
Fitting data (and getting normal vectors) to planes that can be vertical
1
How to use eigenvectors to identify which variables are involved in collinearity?
0
PCA-like analysis to minimize variance
1
Principal Component Analysis, computing the degree of freedom
45
Multiple regression or partial correlation coefficient? And relations between the two
3
Is it possible to perform a regression analysis without a dependent variable?
4
Deal with categorical variables in regression with overlapping classes
See more linked questions