The Chord Diagram can be used to show directed relationships among a group of entities. This is a circular chart, much like a Pie Chart. What would be its linear equivalent, in the same way that a single-column Stacked Bar Chart is the linear equivalent to the Pie Chart? 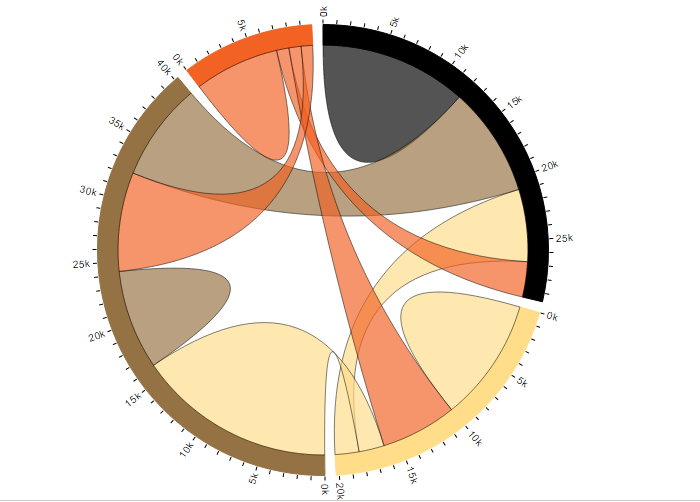 There may well be several displays that match your criteria.

One possibility is to have all entities arrayed down a pair of vertical lines (each one present on both lines). Then the directed lines connecting them can go from the points on the left vertical to the right one, something like this: 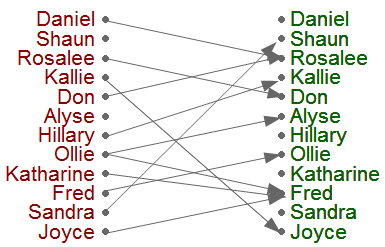 If it's obvious that the source is on the left, and the target on the right, the arrows are not really needed; line segments would suffice.

(It could be done horizontally of course but it would not change the idea.)

In McNeil, D. (1992), "On Graphing Paired Data," The American Statistician, 46:2, pp. 307-311, Don calls it a "tilted line segment plot". While the article specifically discusses paired data the name would serve equally well for the more general case. See also Nick Cox's paper ("Speaking Stata: Graphing agreement and disagreement", The Stata Journal (2004), 4: 3, pp. 329–349) here (which doesn't name it but describes it with the same terms). There are problems if there are many lines, as both authors mention.

Versions of this with width of the lines to represent volume have been used.

Being a pedant, I would say the example slopegraph and Sankey diagrams are not equivalent to the chord diagram. A chord diagram only has one dimension, in terms of the degree around the circle in a polar coordinate system. (You could argue the width is another dimension, but in Wilkinson's Grammar of Graphics this is not a dimension in a coordinate system, but a mapped aesthetic. I know pedantic.)

So if you change the polar coordinate system to a linear one, just simply imagine unwrapping the circle to a straight line. I've seen these called Arc Diagrams. Xiao and Chun (2009) in Visualizing migration flows using Kriskograms give multiple examples. Here they show how arcing flows above and below the line can help disambiguate some of the flow patterns. 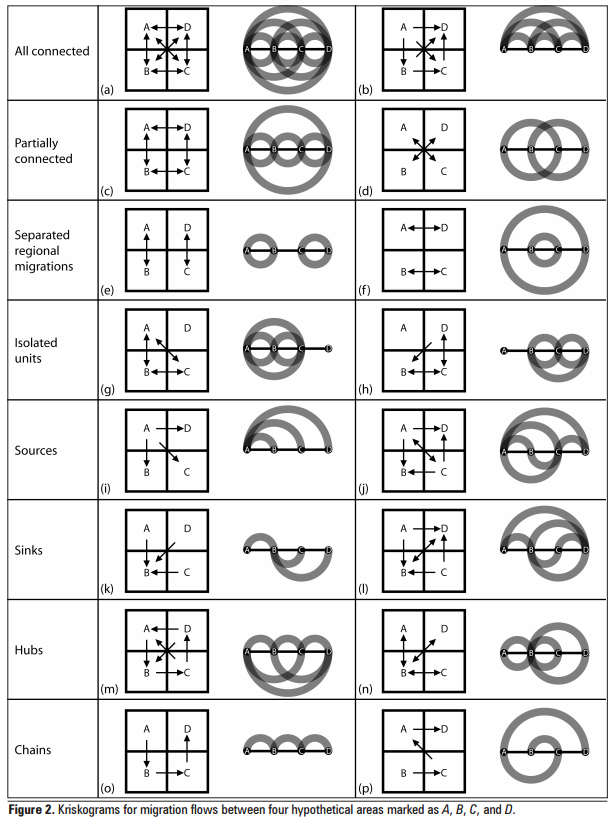 In practice such graphs tend to be very busy, and so are difficult to disentangle all the lines. I tend to like the linear diagrams better than the circular ones, but any complicated data tends to be very hard to see patterns.

This example is fairly simple to imagine unwrapping to a linear coordinate system, but sometimes it is easier to think about these types of graphs in terms of a network of nodes and edges as oppossed to a rectilinear or polar coordinate system. This makes it more clear you can shuffle the location of nodes to however is best to visualize the connections - which may not be any regular geometric pattern.

I would argue that the Sankey diagram can be considered a linear version of the chord diagram.

Not the answer you're looking for? Browse other questions tagged barplot pie-chart or ask your own question.

7
Stacked bar plot
5
Pie charts vs. dot plots
1
How to plot a mekko chart in Excel?
1
what do you call a pie chart with equal arcs but different areas
4
What is the best ratio between width and height in a Bar Chart?
3
How to Distinguish 22 Variables in a Stacked Bar Graph?
7
What is this chart called?