Best fitted distribution to my dataset?

Can anyone help me?

Taking the question at face value (i.e. leaving aside whether it's necessary or even advisable*), just looking at the numbers without knowing what they are (which is were a model should start -- from an understanding of the thing being measured) there are obviously zeroes in the data but the rest of it seems positive and continuous.

* throwing a laundry list of distributions at a problem without accounting for the overfitting (etc) that this approach leads to would be inviting a host of problems.

An obvious place to start would be a mix of a spike at 0 and a positive continuous distribution, of which there are very large numbers. If we just try one (my first thought was a gamma, for no especially good reason since I'm operating in ignorance of what we're measuring here), fitting a gamma to the non-zero part seems to give a perfectly plausible approximation to the distribution: 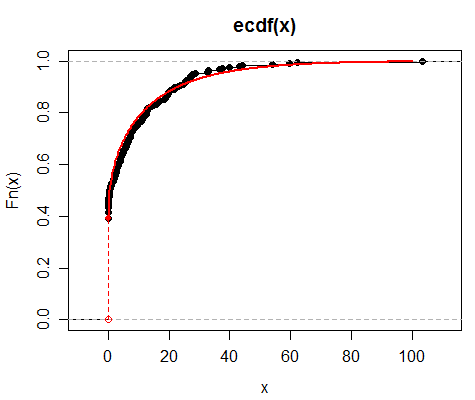 In response to the additional information relating to rainfall -- this would be a mixture of different distributions. If we have 252 days of rainfall, that covers several seasons, and one part of the year would be expected to have different rainfall patterns than others. As such - even if rainfall patterns were stable from year to year - this marginal distribution would depend on which 252 days were included and so still wouldn't be useful in telling us about the rainfall overall, nor in any particular part of the year (like a given month).

I have seen lognormal distributions used for the conditional distribution of rainfall (e.g. given there was some rain, and given the time of year, and given whether or not there was rain on the previous day); that might well be adequate to model your data. Alternatively a conditional gamma or Weibull might work well enough in the same circumstances.

However, I fail to see how just smooshing the conditional distributions all together is likely to be useful at all.

Not the answer you're looking for? Browse other questions tagged r distributions or ask your own question.