Creating a probability distribution that is truncated skewed

I have a dataset I want to use to generate a probability distribution. The distribution is skewed and can only include positive integers. I've tried normal (both skewed and truncated, although I can't figure out how to try both at once using R), poisson, and gamma. I've also plotted it on a Cullen and Frey graph (below). Gamma is by far the best fit of these. Is there an option with a better fit than a gamma distribution or way to find a better option? I'm concerned because the gamma distribution doesn't take into account the requirement that the data be positive integers. Thanks in advance. 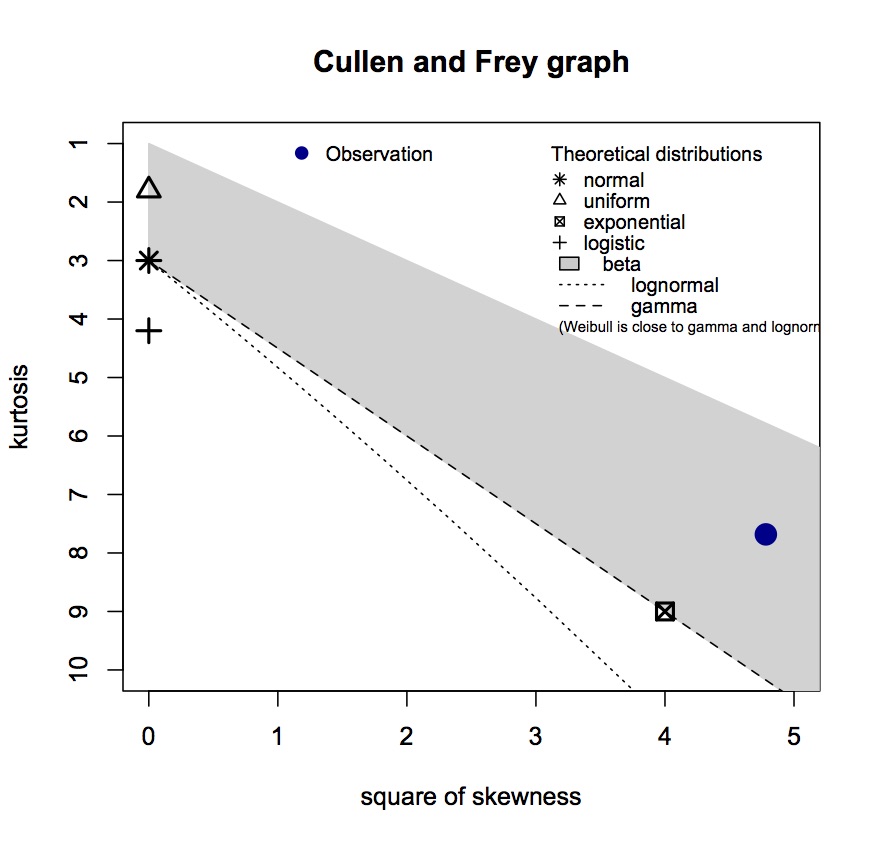 It would be more typical to first attempt to describe discrete data with a discrete distribution. However, it's not clear to me that one should expect "number of species per genus" to follow any of the standard discrete distributions; it seems more like some form of birth-and-death process (new species arise -- "birth", and go extinct -- "death"), and surely something like that kind of understanding would inform the choice of distribution, if a specific distribution were actually needed.

It may be that some other process (perhaps something such as a Chinese restaurant process) might happen to give suitable approximations in some situations, but I'd be inclined to start with a natural model like a birth-death process. I don't know a stationary distribution for that (though I think recursion formulas exist for the pmf), but it at least gives a starting point for simulations from which more suitable distributional choices might arise.

Failing that, I'd have started with a heavy-tailed discrete distribution on the positive integers, like a logarithmic series distribution (which has been used for a host of biological problems such as relative species abundance and even species per genus**) or perhaps a zero-truncated negative binomial$^\dagger$.

$\dagger$ [Note that the logarithmic series arises as a special case of the truncated negative binomial, so these aren't really separate suggestions]

Is there a reason you need to identify a distribution at all?

which discusses its use for modelling species per genus and genera per sub-family among other uses.

In response to the revelation of the existence of explanatory variables (rather than just building a univariate model as the question seems to suggest):

Incidentally, if you still conclude a logarithmic series distribution is suitable, it appears to be exponential family, so it should be possible to do a generalized linear model to include your covariates. (Actually the R package VGAM looks like it can fit a glm with this distribution, via vglm using the logff family. The default link there is logit, but other links are possible.)

Not the answer you're looking for? Browse other questions tagged r count-data skewness distributions truncation or ask your own question.

6
extremely left-skewed response variable - how do I model this dataset?
2
Mean value of truncated normal distribution
1
Fitting a probability distribution and understanding the Cullen and Frey graph
3
fitting a distribution to skewed data with negative values
1
R glmer: distribution for strongly right skewed data
0
Identifying the best distribution to this data?
1
How to know whether a zero-inflated model is the way to go? Both poisson and negative binomial do not fit my count data