Testing the Validity of a Test Statistic (incorrectly)

In this post @Wolfgang shares a few lines of code to test in a simulation the ability of a particular test statistic to perform as expected, measured by the percentage of type I errors. He shows by simulation how the $chi \,square$ test works in the case presented in that original post, despite the small number of "successes" in comparison with the large number of observations.

On a post I wrote to sort of piece together what I've been collecting from many other posts on comparison of proportions, I was trying to come up with a similar type of simulation using the $z$-test. I understand that the $\chi^2$ is mathematically equivalent in this situation, but it was one of these exercises in convincing oneself, and understand the $z \,test$ equations. Further, I wasn't sure the tests were going to be identical in every respect.

So to the question... I road-tested the equation of the $z$ test function, and it did not produce the expected results. The same happened with a similar ad hoc formula in R-Bloggers, which I will use in the rest of the question.

My bet is that my code is flawed (in which case, I'd like to fix it on my prior post), but the values it generates seem plausible; the only odd result being the proportion of type I errors. So I wonder if I could get some help, especially if the results are accurate, and the statistical interpretation is incorrect.

This is the actual problem (more details here if needed):

POPULATION SET UP WITH ONE SINGLE (AVERAGE) TRUE PROPORTION:

To my surprise, the result is 0.09887, and changing the set.seed ends up with larger proportions of falsely rejected null hypothesis.

And I want to let you all know that I was absolutely right: my code was flawed! Thanks a million to @Scortchi for walking me through the problem. Since at least two people up-voted the question, here is the answer:

The probability integral function dictates that if $X \sim N(\mu,\sigma^2)$, the random variable $Y = \Phi(X)$ with $\Phi$ corresponding to the error function ($erf$) (who came up with this name?) will be uniformely distributed as $Y \sim U(a,b)$.

Since we know that the $p-values$ range from $(0,1)$, plotting the histogram should illustrate our expectation (overabundant $p<0.05$ values colored in greenish hue): 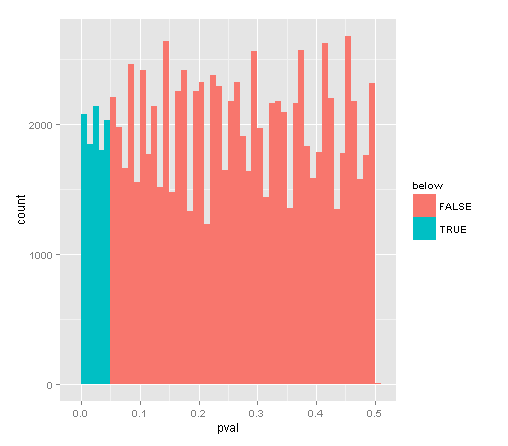 This can be fixed by simply doubling the value of the pvalues. Or perhaps more neatly by changing the SIMULATION part of the code in the OP to:

Not the answer you're looking for? Browse other questions tagged hypothesis-testing statistical-significance proportion z-test or ask your own question.

3
Difference estimate & confidence intervals for $\chi^2$ test between 2 proportions
5
is the z-test for difference of proportions valid for massive samples with tiny proportions?

10
Test for proportions and binary classifier
2
Large overlap between confidence intervals, although z test for difference was significant
1
Null hypothesis testing question?
1
paired-samples t-test or a test between two dependent mean proportions
0
Hypothesis testing with two independent samples test statistics
1
Where is my potential flaw in my Z-test of Proportions?