I have a dataset with two objectives (runtime and solution quality). Is there some way to draw a scatterplot in R that also draws a non-dominated front of the two objectives?

r data-visualization
Share
Improve this question
edited May 19 '13 at 8:16

Presumably "runtime" is better when it is low and "solution quality" is better when it is high. To make these variables more consistent in how they represent the attributes, first re-express them so that high numbers always correspond to better values. For this question, the reciprocal of runtime (which could be interpreted as number of runs per second) would be a good choice, but the negative of runtime would work fine too.

With this convention established, we may plot each record in the dataset by associating the re-expressed "runtime" value with the x coordinate and the "solution quality" value with the y coordinate, creating a scatterplot. One record $(x,y)$ dominates another $(x',y')$ when simultaneously $x\ge x'$, $y\ge y'$, and $(x,y) \ne (x',y')$. No rational actor (using solely information about "runtime" and "solution quality") would choose the dominated option $(x',y')$ when $(x,y)$--which is at least as good on both attributes and better on at least one--is available. Therefore such an actor would focus their interest on the non-dominated options and would be free to neglect all others. 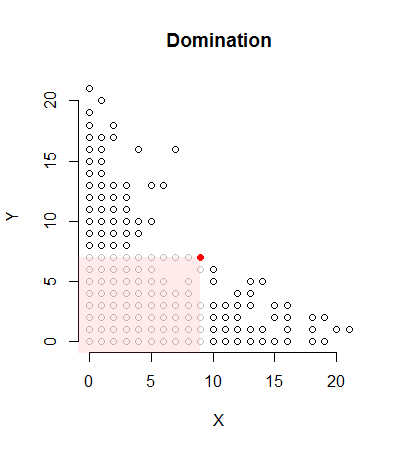 All points dominated by the solid red point are shown in gray. All possible points that it can dominate constitute the (closed) rectangle shown in pink. Because evidently no points in the scatterplot dominate the solid point, it must lie on the non-dominated frontier.

It performs a decreasing lexicographic sort of the coordinates (time: $O(n\log(n))$) and then scans through the first coordinate (time: $O(n)$), putting into effect a line scan algorithm. The points where a new larger value of the second coordinate is found are recorded. Their indexes within the input array xy are returned.

We can prove this algorithm is correct by induction. The initial point, chosen to have a maximal first coordinate and (among such points) a maximal second coordinate, obviously is not dominated. Using it we can eliminate all other points that it does dominate, including itself. The first non-eliminated point next encountered in the algorithm necessarily has a larger value of its second coordinate. It obviously is not dominated by any point because if it were, that other point would already have been encountered. Therefore the algorithm indeed selects non-dominated points and (by induction on the number of points) it finds them all, QED.

To illustrate these concepts and this algorithm, here is plot of a dataset of $16$K records (all with integral values, shown jittered) along with its quasi-convex hull (a dark line at the upper right), its vertices marked as requested in the question, and the "dominance rectangles" of those vertices colored in. 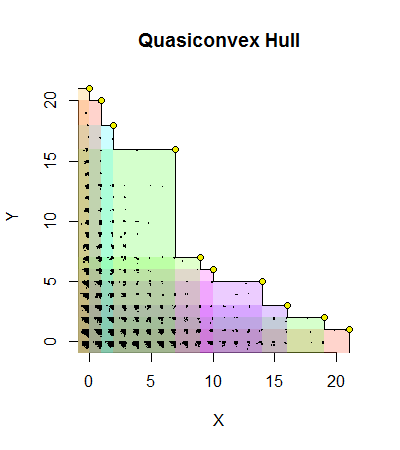 The code to do the calculations, make a scatterplot, and mark the vertices of its quasi-convex hull appears below. It includes a slightly faster R-centric version of hull.qc. It processes a million points in approximately two seconds on this machine.

Not the answer you're looking for? Browse other questions tagged r data-visualization or ask your own question.

3
Generating volcano scatterplot
30
What's a good way to use R to make a scatterplot that separates the data by treatment?
3
Plotting Scatterplot Matrix or Correlation matrix or both?
3
R scatterplot matrix with nonparametric density
3
Understanding some interesting patterns in a scatterplot
1
visualization of two sets of confidence intervals in a scatterplot
3
How to construct a scatterplot with regression line that adjusts for other covariates?