I am trying to interpret the sign of my 5 x-variables against y-variable. The sign of some coefficients in the regression output (command: reg) are different than the signs under correlation matrix (command: correlate). Which one defines the relation sign/direction?

The correlation coefficient is the unconditional simple relationship between Y and x1 . The regression coefficient is the conditional impact on Y GIVEN x2,x3,x4,and x5. They would have the same sign if x1,x2,x3,x4,x5 were orthogonal (uncorrelated) with each other. As @Whuber correctly reflected, if they are not orthogonal they may or may not have signs that are the same. 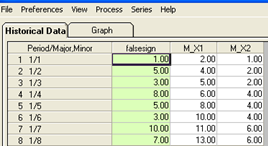 Let is analyze Y as a function of X1 and X2 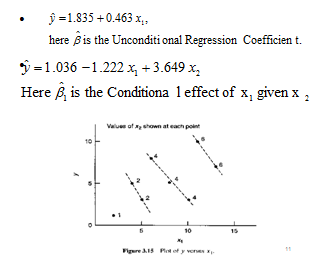 . First separately then together. The regression coefficient of the unconditional relationship between Y and M_X1 is .463 ( same sign as the simple correlation ) while the conditional impact of M_X1 given M_X2 is -1.222 (different sign ). As others have pointed out this is sometimes referred to as " the expected sign fallacy ', "Simpson's paradox" , "Ecological fallacy " etc. In summary conditional analysis (multiple regression) is often different from unconditional analysis (simple regression) because the predictor variables are not independent of each other.

Not the answer you're looking for? Browse other questions tagged regression correlation least-squares regression-coefficients or ask your own question.

60
Is there a difference between 'controlling for' and 'ignoring' other variables in multiple regression?
7
Coefficient changes sign when adding a variable in logistic regression