When calculating the prediction intervals for a regression function, can the y values be precise values "without errors"?

As far as I know, in regression function calculation only the x values are assumed to have no error and not the y values (see requirements below). But in computational chemistry the calculated values are precise per definition, as same input gives same output, so they don't have standard deviation or sth like that.

The mathematical requirements are, according to my literature (german DIN):

They state: If those requirements are not satisfied, then the calculation scheme cannot be used and another scheme has to be chosen. And that last requirement is, what the question is about: What if both, x and y values, have "no error" ... is the system still usable or do I need something more appropriate?

For clarification, this is the system that should be treated: 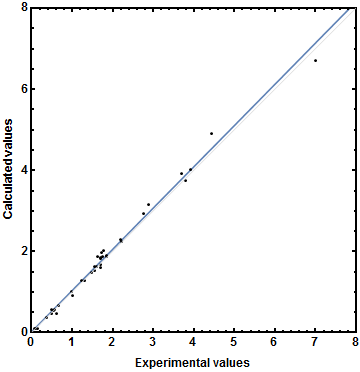 First of all, deterministic (i.e. the same computation always yields the same result) does not imply error-free (not even free of random error!).

That being said, both ways of modeling, $y = f (x)$ as well as $x = f (y)$ are used in chemometrics. The former is known as ordinary or classical regression or calibration, the latter is referred to as inverse calibration.

Both ways of calibration have different characteristics.

I work with vibrational spectra which are sometimes computed for molecules in vacuum and then a correction factor is applied to account for the difference between vacuum (theory) and solution (reality/experiment). While I may be biased because I'm experimental spectroscopist, I'd say that at least in this situation it is very clear where the major source of error is...

They give formulas that are valid only under the stated assumptions (which are also in chemical analysis very often not met, particularly the variance homogeneity (also your graph looks like increasing variance with increasing values). The consequence is that you cannot use the "shortcut" formulas but have to do the proper calculation. In particular, you'd underestimate the uncertainty for high values and overestimate uncertainty for low values. From a statistics point of view, a weighted regression would be appropriate.

However, partiularly if you need to measure figures of merit such as limit of detection LOD or limit of quantitation LOQ, there are straightforward (though tedious) methods to do this almost without assumptions.

Not the answer you're looking for? Browse other questions tagged regression chemometrics or ask your own question.

10
Is regression of x on y clearly better than y on x in this case?