Example of heavy-tailed distribution that is not long-tailed

Could somebody please provide an example of:

so I can better understand the meaning of their definitions?

It would be even better if both could have a unit variance.

The two definitions are close, but not exactly the same. One difference lies in the need for the survival ratio to have a limit.

For most of this answer I will ignore the criteria for the distribution to be continuous, symmetric, and of finite variance, because these are easy to accomplish once we have found any finite-variance heavy-tailed distribution that is not long-tailed.

A distribution $F$ is heavy-tailed when for any $t\gt 0$,

Long-tailed distributions are heavy. Furthermore, because $G$ is nonincreasing, the limit of the ratio $(2)$ cannot exceed $1$. If it exists and is less than $1$, then $G$ is decreasing exponentially--and that will allow the integral $(1)$ to converge.

The only way to exhibit a heavy-tailed distribution that is not long-tailed, then, is to modify a long-tailed distribution so that $(1)$ continues to hold while $(2)$ is violated. It's easy to screw up a limit: change it in infinitely many places that diverge to infinity. That will take some doing with $F$, though, which must remain increasing and cadlag. One way is to introduce some upward jumps in $F$, which will make $G$ jump downwards, lowering the ratio $G_F(x+1)/G_F(x)$. To this end, let's define a transformation $T_u$ that turns $F$ into another valid distribution function while creating a sudden jump at the value $u$, say a jump halfway from $F(u)$ to $1$:

This alters no basic property of $F$: $T_u[F]$ is still a distribution function.

is a distribution function. By construction, it is not long-tailed because there are infinitely many points at which its survival ratio $G_{F_\infty}(x+1)/G_{F_\infty}(x))$ drops to $1/2$ or below, showing it cannot have $1$ as a limit. 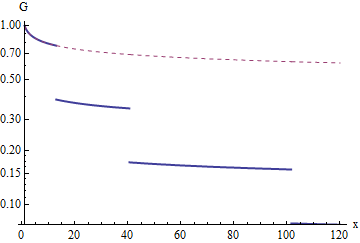 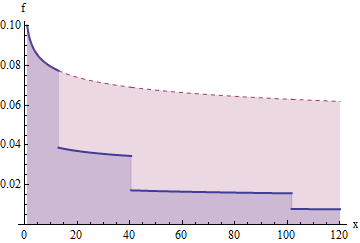 Let us pick such a sequence $(u_i)$ to define $F_\infty$. We can check that it remains heavy-tailed by picking $t=1/n$ for some whole number $n$ and applying the construction:

which still diverges. Since $t$ is arbitrarily small, this demonstrates that $F_\infty$ remains heavy-tailed, even though its long-tailed property has been destroyed. 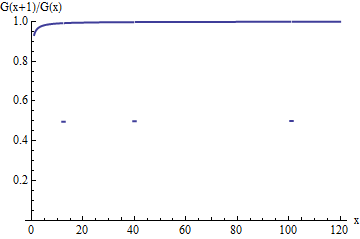 This is a plot of the survival ratio $G(x+1)/G(x)$ for the cut down distribution. Like the ratio of the original $G$, it tends toward an upper accumulation value of $1$--but for unit-width intervals terminating at the $u_i$, the ratio suddenly drops to only half of what it originally was. These drops, although becoming less and less frequent as $x$ increases, occur infinitely often and therefore prevent the ratio from approaching $1$ in the limit.

If you would like a continuous, symmetric, zero-mean, unit-variance example, begin with a finite-variance long-tailed distribution. $F(x) = 1 - x^{-p}$ (for $x \gt 0$) will do, provided $p \gt 1$; so would a Student t distribution for any degrees of freedom exceeding $2$. The moments of $F_\infty$ cannot exceed those of $F$, whence it too has finite variance. "Mollify" it via convolution with a nice smooth distribution, such as a Gaussian: this will make it continuous but will not destroy its heavy tail (obviously) nor the absence of a long tail (not quite as obvious, but it becomes obvious if you change the Gaussian to, say, a Beta distribution whose support is compact).

for all $x\in\mathbb{R}$. Its variance will remain finite, so it can be standardized to the desired distribution.

Not the answer you're looking for? Browse other questions tagged distributions heavy-tailed or ask your own question.