MSE vs area under ROC

Suppose you're estimating the posterior probabilities of class membership for a binary problem. I'll denote the two classes by Group 1 and Group 2.

Now suppose that we fit a model and on a holdout set we get the following histogram of our predicted probabilities where each point in the histogram corresponds to $\hat P(y_i = \textrm{Group 1} | x_i)$: 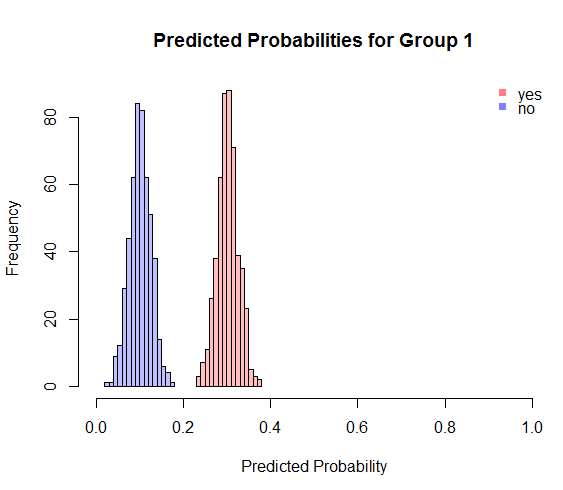 The reddish histogram corresponds to the probabilities for observations that truly belong to group 1, while the blue histogram is for observations that truly belong to group 2. In this case we have perfectly separated the two classes so we'll get an AUC of 1. But if we threshold our probabilities at 1/2 (not necessarily the best thing to do but this is common) we'll misclassify half of this set by labeling everything as Group 2.

Based on what you've described it seems like this sort of thing could be happening to you.

Not the answer you're looking for? Browse other questions tagged classification error roc or ask your own question.

6
ROC graph interpretation
1
Scoring a classifier with ROC AUC
9
“Good” classifier destroyed my Precision-Recall curve. What happened?
1
Relation of criteria selection and AUROC
1
Area Under the ROC Curve: Comparing identification performance between two values of the same variable
0
Can the ROC AUC of a total test set be larger than the AUC for any subset of some test set partition?