Is rejecting the hypothesis using p-value equivalent to hypothesis not belonging to the confidence interval?

While formally deriving the confidence interval of an estimate, I ended up with a formula that resembles very closely the way $p$-value is computed.

What you've observed is that when a test and a confidence interval is based on the same statistic, there is an equivalence between them: we can interpret the $p$-value as the smallest value of $\alpha$ for which the null value of the parameter would be included in the $1-\alpha$ confidence interval.

Let $\theta$ be an unknown parameter in the parameter space $\Theta\subseteq\mathbb{R}$, and let the sample $\mathbf{x}=(x_1,\ldots,x_n)\in\mathcal{X}^ n\subseteq\mathbb{R}^n$ be a realization of the random variable $\mathbf{X}=(X_1,\ldots,X_n)$. For simplicity, define a confidence interval $I_\alpha(\mathbf{X})$ as a random interval such that its coverage probability $$ P_\theta(\theta\in I_\alpha(\mathbf{X}))= 1-\alpha\qquad\mbox{for all }\alpha\in(0,1). $$ (You could similarly consider more general intervals, where the coverage probability either is bounded by or approximately equal to $1-\alpha$. The reasoning is analogous.) 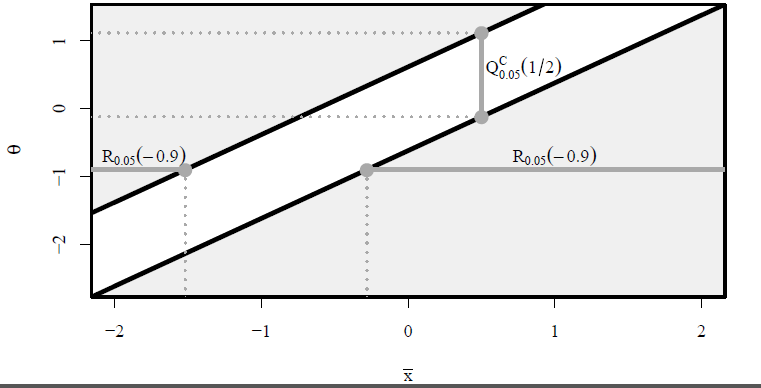 (Much of this is taken from my PhD thesis.)

Above I described the standard way of constructing confidence intervals. In this approach, we use some statistic related to the unknown parameter $\theta$ to construct the interval. There are also intervals based on minimization algorithms, which seek to minimize the length of the interval condition on the value of $X$. Usually, such intervals do not correspond to a test.

This phenomenon has to do with problems related to such intervals not being nested, meaning that the 94 % interval can be shorter than the 95 % interval. For more on this, see Section 2.5 of this recent paper of mine (to appear in Bernoulli).

And a second "no"

And sometimes "yes" is not a good thing

As pointed out by f coppens in a comment, sometimes intervals and tests have somewhat conflicting goals. We want short intervals and tests with high power, but the shortest interval does not always correspond to the test with the highest power. For some examples of this, see this paper (multivariate normal distribution), or this (exponential distribution), or Section 4 of my thesis.

Bayesians can also say both yes and no

Some years ago, I posted a question here about whether a test-interval-equivalence exists also in Bayesian statistics. The short answer is that using standard Bayesian hypothesis testing, the answer is "no". By reformulating the testing problem a little bit, the answer can however be "yes". (My attempts at answering my own question eventually turned into a paper!)

When looking at a single parameter, it is possible that a test about the value of the parameter and the confidence interval "mismatch" depending on how they are constructed. In particular, a hypothesis test is a level $\alpha$-test, if it rejects the null hypothesis a proportion $\leq \alpha$ of the time when the null hypothesis is true. For that reason one can e.g. use estimates of model parameters (e.g. the variance) that are only valid under the null hypothesis. If one then tried to construct a CI by inverting this test, the coverage may be not quite right under the alternative hypothesis. For that reason one would usually construct a confidence interval differently so that the coverage is also right under the alternative, which can then lead to a (usually very small) mismatch.

Not the answer you're looking for? Browse other questions tagged hypothesis-testing confidence-interval p-value or ask your own question.