Rare event logistic regression bias: how to simulate the underestimated p's with a minimal example?

CrossValidated has several questions on when and how to apply the rare event bias correction by King and Zeng (2001). I am looking for something different: a minimal simulation-based demonstration that the bias exists.

In particular, King and Zeng state

"... in rare events data the biases in probabilities can be substantively meaningful with sample sizes in the thousands and are in a predictable direction: estimated event probabilities are too small."

Here is my attempt to simulate such a bias in R:

When I run this, I tend to get very small z-scores, and the histogram of estimates is very close to centered over the truth p = 0.01.

What am I missing? Is it that my simulation is not large enough show the true (and evidently very small) bias? Does the bias require some kind of covariate (more than the intercept) to be included?

Update 1: King and Zeng include a rough approximation for the bias of $\beta_0$ in equation 12 of their paper. Noting the N in the denominator, I drastically reduced N to be 5 and re-ran the simulation, but still no bias in the estimated event probabilities is evident. (I used this only as inspiration. Note that my question above is about estimated event probabilities, not $\hat \beta_0$.)

Update 2: Following a suggestion in the comments, I included an independent variable in the regression, leading to equivalent results:

Explanation: I used p itself as the independent variable, where p is a vector with a repetitions of a small value (0.01) and a larger value (0.2). In the end, sim stores only the estimated probabilities corresponding to $p = 0.01$ and there is no sign of bias.

Update 3 (May 5, 2016): This does not noticeably change the results, but my new inner simulation function is

Explanation: The MLE when y is identically zero does not exist (thanks to comments here for the reminder). R fails to throw a warning because its "positive convergence tolerance" actually gets satisfied. More liberally speaking, the MLE exists and is minus infinity, which corresponds to $p=0$; hence my function update. The only other coherent thing I can think of doing is discarding those runs of the simulation where y is identically zero, but that would clearly lead to results even more counter to the initial claim that "estimated event probabilities are too small".

This is an interesting question - I'm have done a few simulations that I post below in the hope that this stimulates further discussion.

First of all, a few general comments:

Anyway, here some code that calculates the difference between estimates and truth for intercept, slope and predictions in a logistic regression, first for a low sample size / moderate incidence situation:

The resulting bias and standard errors for intercept, slope and prediction are

I would conclude that there is pretty good evidence for a slight negative bias in the intercept, and a slight positive bias in the slope, although a look at the plotted results shows that the bias is small compared the the variance of the estimated values.

If I'm setting the parameters to a rare-event situation

I'm getting a larger bias for the intercept, but still NONE on the prediction

In the histogram of the estimated values, we see the phenomenon of degenerate parameter estimates (if we should call them like that)

Let's remove all rows for which intercept estimates are <20

The bias decreases, and things become a bit more clear in the figures - parameter estimates are clearly not normally distributed. I wonder that that means for the validity of the CIs that are reported.

I would conclude the rare event bias on the intercept is driven by rare events itself, namely those rare, extremely small estimates. Not sure if we want to remove them or not, not sure what the cutoff would be.

An important thing to note though is that, either way, there seems to be no bias on predictions at the response scale - the link function simply absorbs these extremely small values.

Figure 7 in the paper seems to most-directly address the question of bias in the predictions. I don't fully understand the figure (specifically, the interpretation "estimated event probabilities are too small" seems like an oversimplification) but I managed to reproduce something similar to it based on their terse description of their simulation in Section 6.1:

The first plot is my replication of their figure 7, with the addition of dashed curves representing the full range of results over 10 trials.

As per the paper, x here is a predictor variable in the regression drawn from a standard normal. Thus, as illustrated in the second plot, the the relative frequency of observations for x > 3 (where the most visible bias occurs in the first plot) is diminishingly small.

The third plot shows the "true" simulation probabilities in the generating process as a function of x. It appears that the greatest bias occurs where x is rare or non-existent.

Taken together, these suggest that the OP entirely misinterpreted the central claim of the paper by confusing "rare event" (i.e. x > 3) with "event for which P(Y = 1) is very small". Presumably the paper concerns the former instead of the latter. 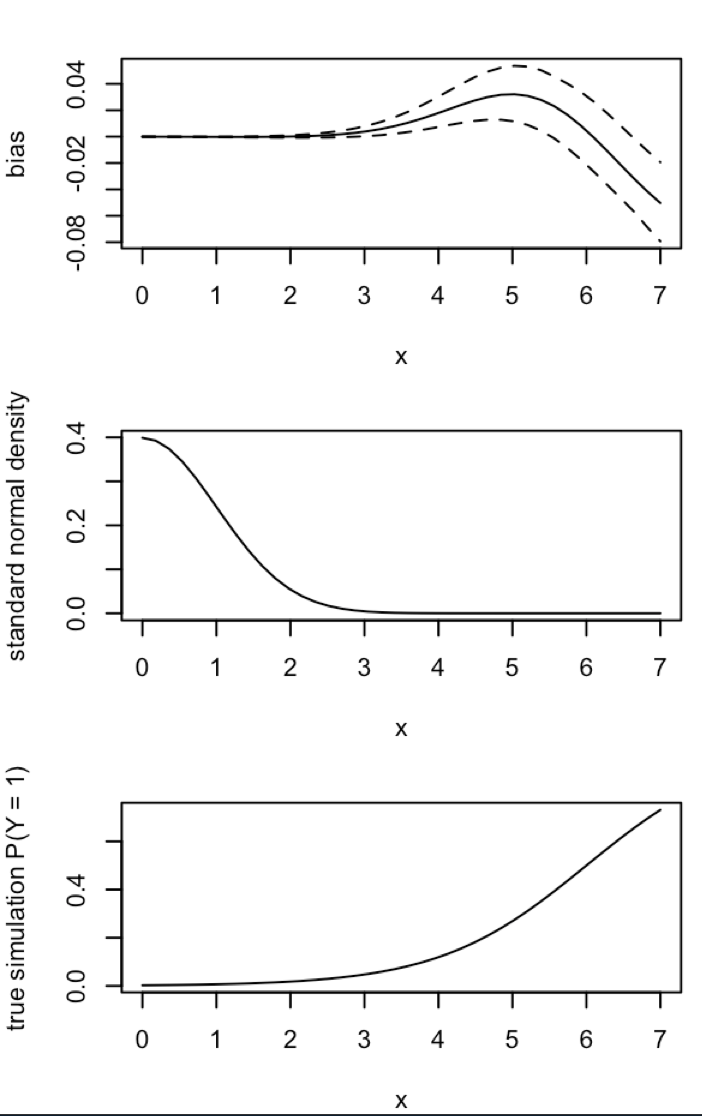 Rare events bias only occurs when there are regressors. It won't occur in an intercept-only model like the one simulated here. See this post for details: http://statisticalhorizons.com/linear-vs-logistic#comment-276108

Not the answer you're looking for? Browse other questions tagged r logistic simulation bias rare-events or ask your own question.

14
Goodness-of-fit test in Logistic regression; which 'fit' do we want to test?