The authors of a paper (http://www.isprs.org/proceedings/XXXIV/part3/papers/paper106.pdf) develop a bare earth extraction algorithm for LiDAR that is based on kriging. What I don't understand is: they add measurement accuracy to the diagonals of their covariance matrix. The step is succinctly outlined in A.1 (so not a big time investment for anyone kind enough to follow the link).

Here is essentially what they do:

I think this is all pretty standard, except for the $\color{red}{\sigma_0/p_i}$:

What I've tried so far:

I have a pretty good quantitative background, but don't have the strongest background in stats (just fyi). I have take taken a geospatial stats course though, so I've had coursework on kriging. I suspect that $\sigma$ could really be written as a matrix, but for some reason the off-diagonals are zero. It would seem less hokie to add matrices than to add to specific terms in a matrix. I wonder if the off-diagonal terms are zero because the measurement error between different points are uncorrelated. Even in that case, I thought the measurement error was wrapped up in the covariance function $C(P_iP_j)$ and would be represented by the nugget term, but they use a Gaussian model with no nugget.

Edit: I'm a little more than half way there. I understand how this works, but still not why it's justified.

What I've come to understand:

I get how the weights diminish the influence of large-residual points. I thought the weight would act in the wrong direction, but I failed to recognize that the covariance matrix gets inverted. Interestingly (to me, maybe obvious to others here), the inverse of the covariance matrix can be thought of as a coupling matrix, which determines the strength of interaction between data points -- almost like masses attached to springs (e.g., How to interpret an inverse covariance or precision matrix?). 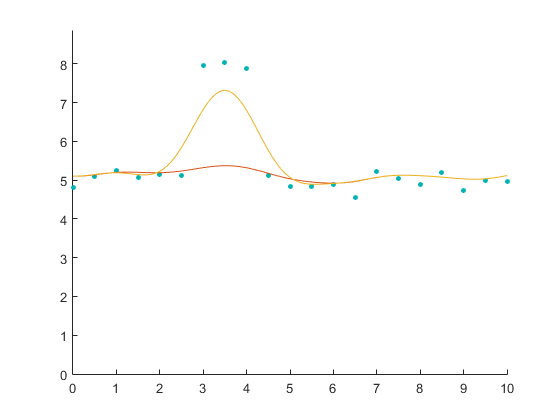 That's how the weights decrease the influence of large-residual elevation points.

What I have yet to understand:

I still don't understand why the authors would have thought to do this, or why it's valid to add a term to the diagonals of the covariance matrix (although I trust it is valid). @user30490, you said this was just a nugget term. There's two things I really don't understand about this. First, I thought the nugget term was wrapped up in the covariance model, which would put it in every term of the covariance matrix -- not just the diagonals. Second, the covariance model was fit from the empirical semivariogram. So, I would think that adding a term wholesale would throw off that fit, e.g., the sill would get raised above the data.

70
How to interpret an inverse covariance or precision matrix?