This question is related to my question about the one-sited chi-square test. As an excuse: The advisor of my masters thesis told me that I should use a one-sited t-test. The answers that I just got for the chi-square-question kind of confused me and I would like to doublecheck.

I have two samples. My hypothesis is: Mean value of Sample A is larger then the mean value of sample B.

I use SPSS for the statistics. I use the "two sample t-Test for equality of means". SPSS only gives "sig. (2-tailed)". This is the p-value - correct? As far as I remember from my statistic lecture, SPSS conducts a two-sided T-Test. So I am allowded to divde the "sig. (2-tailed)-Value" by 2 to receive the 1-sided p-value?

It's not clear what you intend by "allowed" -- that depends on who would be doing the allowing.

As for whether it's correct to do so, yes, but only if the sample is consistent with the directional alternative. 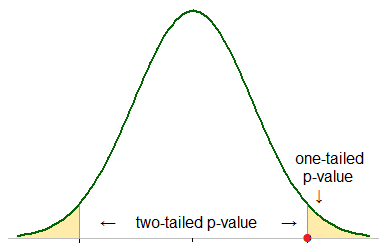 Reading around, this appears to be common practice when using SPSS (by contrast most packages happily allow you to attempt to shoot yourself in the foot in this manner; I must say I do prefer to be able to more directly make the calculation I deem suitable - the responsibility over shooting at my feet is my own).

If the alternative hypothesis goes in the opposite direction to the sample arrangement (so you're "in the wrong tail" to reject) the correct one tailed p-value is not obtained by halving. Instead, in that case you halve and subtract from 1: 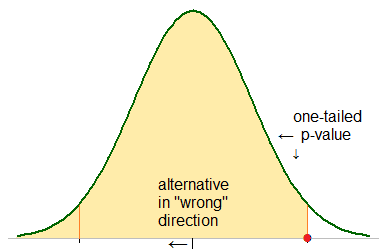 [There are some tests for which one-sided and two-sided tests don't exactly have that "halving" correspondence even when the direction of difference that leads to rejection is the same in the sample. The Kolmogorov-Smirnov test is one example.]

Incidentally, you should not be deciding between using one and two tailed tests after you see your data! That starts to sound a lot like significance-hunting, which is probably a large part of the reason SPSS gets in your way here. Such decisions - even when a one tailed test would be entirely sensible - should not be made after-the-fact, but at the planning stage and should typically be carefully justified.

Not the answer you're looking for? Browse other questions tagged t-test p-value or ask your own question.

7
Interpreting one- and two-tailed tests
1
Why divide the t-test p-value by 2 in the SPSS output?