Check whether a coin is fair

Given a coin you don’t know it’s fair or unfair. Throw it 6 times and get 1 tail and 5 head. Determine whether it’s fair or not. What’s your confidence value?

I came out the following solution:

$X$: is the number of heads

Is the above test a good one? And I did not know how to calculate the confidence value?

[I think I'd start by asking for a whiteboard, markers -- and an eraser, because one boardful isn't enough to explain everything wrong with the question.]

I'm going to answer this question by rejecting its premises.

Given a coin you don’t know it’s fair or unfair.

Yes, actually, I do. In fact I don't even need to see data. It's not fair.

Throw it 6 times and get 1 tail and 5 heads. Determine whether it’s fair or not.

I really don't care what the data are. It makes no difference to my answer, since the data could not possibly demonstrate fairness, even if fairness were a realistically possible state to be in.

(In any case, even if there were a way to do this statistically I don't know of any statistical procedure that gives anything I'd agree to call "confidence values", so I also reject the form of that question. What does that term even mean? If I were asked a question phrased that way in an interview, I'd have serious concerns about working there, because it seems to suggest the people conducting the interview don't really understand what they're even asking - and that suggests either nobody there knows this stuff, or they don't care enough about this position to make sure the interview is being conducted by someone who does. Either way, it would certainly influence my willingness to work there.)

Forgetting everything I just said for the moment, some comments on your hypothesis test:

Your process for a hypothesis test is wrong.

That's a lot of errors in a few lines! If I was involved in such an interview**, I might forgive the error with the rejection rule as something one could overlook under interview pressure, but the first two errors would suggest some fundamental problems.

** leaving aside that I'd never ask such a poor question, nor would I likely care enough about hypothesis testing to even think to ask a question about it.

I am not going to attempt to provide final answers to your question; I believe the topic is more than addressed after the comprehensive response given by Glen. However, and apropos of his comment about a Bayesian approach, I'd like to post some illustrations about the way our preconceptions about the "fairness" of the coin (or the experiment in general) affects the posterior probability density, i.e. the $p\,(\theta\,\vert\,\text{Data})$, where $\theta$ stands for the probability of heads in the coin toss.

We walk into the game (not a very exciting game, but still...), and we have absolutely no reason to assume that there is foul play going on. Things being by nature less than perfect, we have it in our mind that the coin is fair-ish. In other words, we think that the probability of heads, $\theta$, falls somewhere around $\frac{1}{2}$. Later, the unexpected single tail out of $6$ tosses, will force us to move the posterior probability of $\theta$ to the left (the arrows indicate the influence of the data on the prior distribution): 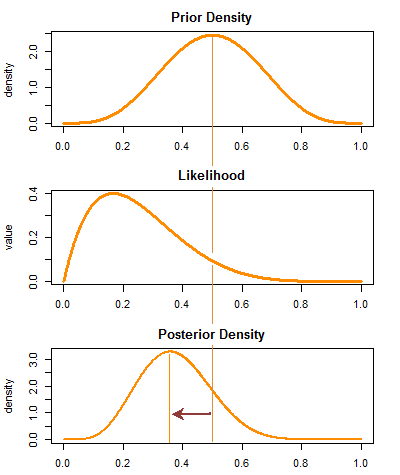 We strongly suspect from insider's leaked information that the game is markedly biased towards tails, and we not only are about to make a killing, but also in need to further reinforce our conviction after the first round, doubling down our bet: 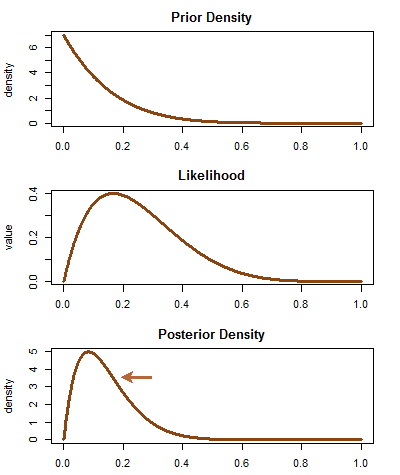 We've never played before, but we have read a manual, and we feel ready. All signs clearly indicate that the coin is markedly biased towards $heads$, a mistake that we will soon start to correct at a high $\ $\$ cost: 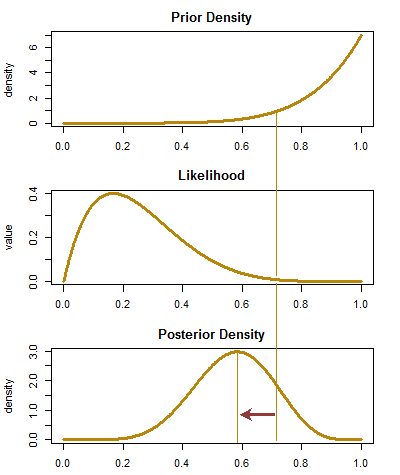 It's a good thing that the $\beta(1,1)$ distribution turns into a $U\,(0,1)$ to address this scenario, where only the likelihood will influence the -posterior probability of $\theta$. As brought up to my attention, a Jeffreys prior is close and possibly more correct: 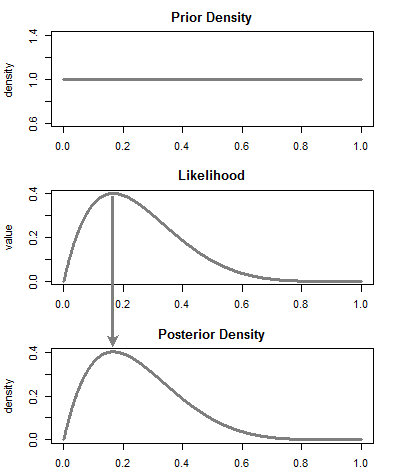 So I hope this provides a bit of a light-hearted visual depiction of our approach to estimating the chances of this game being rigged, perhaps encapsulating more of a real scenario than calculations of the type pbinom(1, 6, 0.5). If you want the code in R, and the credits to a great video with Matlab illustrations, I posted it here.

Null hypothesis: half of the coins you tossed are heads and half are tails. Alternative hypothesis: opposite to the above

Then you calculate the chi square using this formula sum((f0-fe)^2/fe) where f0 is your statistic or point estimate and fe is the expected value. And then you compare this value with critical chi square value given from table to determine if you reject null hypothesis.

13
A job interview question on flipping a coin
12
Is tossing a coin a fair way of randomising a group into two groups?
4
sample size calculation for obtaining coin fairness

4
Finding the rejection region of a given case
14
You observe k heads out of n tosses. Is the coin fair?
12
Is it possible to accept the alternative hypothesis?
0
Fairness of a Coin
0
Find probability of rejecting a true null hypothesis
2
Nonparametric Sign Test
1
Significance and certainty in hypothesis testing