Can I use other k moments for method of moments?

If I have 2 parameters, can I use, say 7th or 8th moments, instead of the first two moments to solve the equations? If yes, is there any difference?

You could, but method of moments is conventionally applied to the lowest moments that will solve the problem.

The effect of doing so anyway will be to focus attention toward the more extreme observations and away from the "body" (e.g. the values a more typical distance from the mean, such as one sd from it).

Note also that as you go up the moments, the high moments tend become somewhat alike (the 7th and 8th raw moments often give quite similar information in a general sense, at least for positive rvs) - 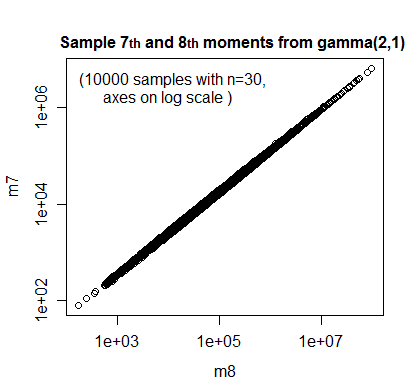 For central moments, the absolute value of the 7th moment will often tend to be similar to the 8th moment to a power <1 (and a similar calculation also forms a bound on the 7th moment); the apparent bound for a given distribution may be some distance from the possible numerical bound). Much of the information that the 7th carries that the 8th doesn't would tend to lie in its sign, more than in its value. 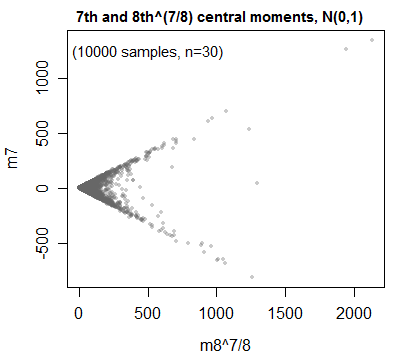 Taking absolute values and using log scales to "zoom in" with a bit more detail: 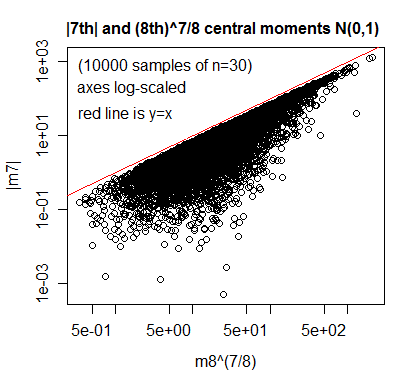 Fairly strong dependence suggests that in some cases (probably more the first than the second) you perhaps could tend to have a loss of information compared to less strongly related measures, somewhat akin to the issue with multicollinearity in regression.

Why do you want to do that? You can try, the method of moments is just a heuristic for constructiog estimators. But 7th and 8th moments are estimated from data by raising data to 7th or 8th power. That introces a lot of variability, so resulting estimators would probably be very unstable and of little use. But, you an try, see, simulate!

Not the answer you're looking for? Browse other questions tagged estimation method-of-moments or ask your own question.