This is somewhat of a beginner's question, but how does one interpret an exp(B) result of 6.012 in a multinomial logistic regression model?

In case both alternatives are incorrect, can someone please mention the correct way?

Ive searched many resources on the internet and I get to these two alternatives, and I am not entirely sure which one is correct.

It will take us a while to get there, but in summary, a one-unit change in the variable corresponding to B will multiply the relative risk of the outcome (compared to the base outcome) by 6.012.

One might express this as a "5012%" increase in relative risk, but that's a confusing and potentially misleading way to do it, because it suggests we should be thinking of the changes additively, when in fact the multinomial logistic model strongly encourages us to think multiplicatively. The modifier "relative" is essential, because a change in a variable is simultaneously changing the predicted probabilities of all outcomes, not just the one in question, so we have to compare probabilities (by means of ratios, not differences).

The rest of this reply develops the terminology and intuition needed to interpret these statements correctly.

Let's start with ordinary logistic regression before moving on to the multinomial case.

For dependent (binary) variable $Y$ and independent variables $X_i$, the model is

Thus, $\beta_m$ is the marginal change in log odds with respect to $X_m$.

To recover $\exp(\beta_m)$, evidently we must set $\delta=1$ and exponentiate the left hand side:

This exhibits $\exp(\beta_m)$ as the odds ratio for a one-unit increase in $X_m$. To develop an intuition for what this might mean, tabulate some values for a range of starting odds, rounding heavily to make the patterns stand out:

For really small odds, which correspond to really small probabilities, the effect of a one unit increase in $X_m$ is to multiply the odds or the probability by about 6.012. The multiplicative factor decreases as the odds (and probability) get larger, and has essentially vanished once the odds exceed 10 (the probability exceeds 0.9). 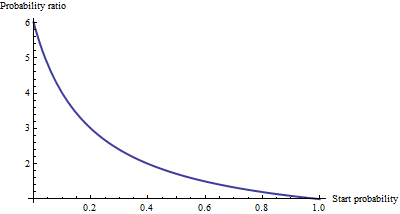 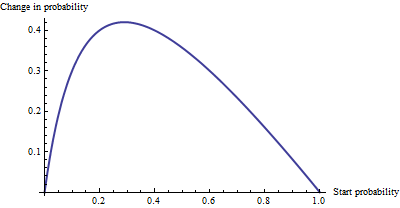 (This has been added as a later edit.)

Having recognized the value of using log odds to express chances, let's move on to the multinomial case. Now the dependent variable $Y$ can equal one of $k \ge 2$ categories, indexed by $i=1, 2, \ldots, k$. The relative probability that it is in category $i$ is

with parameters $\beta_j^{(i)}$ to be determined and writing $Y_i$ for $\Pr[Y=\text{category }i]$. As an abbreviation, let's write the right-hand expression as $p_i(X,\beta)$ or, where $X$ and $\beta$ are clear from the context, simply $p_i$. Normalizing to make all these relative probabilities sum to unity gives

(There is an ambiguity in the parameters: there are too many of them. Conventionally, one chooses a "base" category for comparison and forces all its coefficients to be zero. However, although this is necessary to report unique estimates of the betas, it is not needed to interpret the coefficients. To maintain the symmetry--that is, to avoid any artificial distinctions among the categories--let's not enforce any such constraint unless we have to.)

One way to interpret this model is to ask for the marginal rate of change of the log odds for any category (say category $i$) with respect to any one of the independent variables (say $X_j$). That is, when we change $X_j$ by a little bit, that induces a change in the log odds of $Y_i$. We are interested in the constant of proportionality relating these two changes. The Chain Rule of Calculus, together with a little algebra, tells us this rate of change is

This has a relatively simple interpretation as the coefficient $\beta_j^{(i)}$ of $X_j$ in the formula for the chance that $Y$ is in category $i$ minus an "adjustment." The adjustment is the probability-weighted average of the coefficients of $X_j$ in all the other categories. The weights are computed using probabilities associated with the current values of the independent variables $X$. Thus, the marginal change in logs is not necessarily constant: it depends on the probabilities of all the other categories, not just the probability of the category in question (category $i$).

When there are just $k=2$ categories, this ought to reduce to ordinary logistic regression. Indeed, the probability weighting does nothing and (choosing $i=2$) gives simply the difference $\beta_j^{(2)} - \beta_j^{(1)}$. Letting category $i$ be the base case reduces this further to $\beta_j^{(2)}$, because we force $\beta_j^{(1)}=0$. Thus the new interpretation generalizes the old.

To interpret $\beta_j^{(i)}$ directly, then, we will isolate it on one side of the preceding formula, leading to:

Another interpretation, albeit a little less direct, is afforded by (temporarily) setting category $i$ as the base case, thereby making $\beta_j^{(i)}=0$ for all the independent variables $X_j$:

The marginal rate of change in the log odds of the base case for variable $X_j$ is the negative of the probability-weighted average of its coefficients for all the other cases.

Actually using these interpretations typically requires extracting the betas and the probabilities from software output and performing the calculations as shown.

Finally, for the exponentiated coefficients, note that the ratio of probabilities among two outcomes (sometimes called the "relative risk" of $i$ compared to $i'$) is

The exponentiated coefficient $\exp(\beta_j^{(i)})$ is the amount by which the relative risk $\Pr[Y = \text{category }i]/\Pr[Y = \text{base category}]$ is multiplied when variable $X_j$ is increased by one unit.

Try considering this bit of explanation in addition to what @whuber has already written so well. If exp(B) = 6, then the odds ratio associated with an increase of 1 on the predictor in question is 6. In a multinomial context, by "odds ratio" we mean the ratio of these two quantities: a) the odds (not probability, but rather p/[1-p]) of a case taking the value of the dependent variable indicated in the output table in question, and b) the odds of a case taking the reference value of the dependent variable.

I was also looking for the same answer, but the once above were not satisfying for me. It seemed to complex for what it really is. So I will give my interpretation, please correct me if I am wrong.

Do however read to the end, since it is important.

First of all the values B and Exp(B) are the once you are looking for. If the B is negative your Exp(B) will be lower than one, which means odds decrease. If higher the Exp(B) will be higher than 1, meaning odds increase. Since you are multiplying by the factor Exp(B).

Unfortunately you are not there yet. Because in a multinominal regression your dependent variable has multiple categories, let's call these categories D1, D2 and D3. Of which your last is the reference category. And let's assume your first independent variable is sex (males vs females).

So you are always comparing against your reference category of the dependent but also independent variables. This is not true if you have a covariate variable. In that case it would mean; a one unit increase in X increases the odds by a factor of 1.21 of being in category D1 rather than D3.

For those with an ordinal dependent variable:

If you have an ordinal dependent variable and did not do an ordinal regression because of the assumption of proportional odds for instance. Keep in mind your highest category is the reference category. Your result as above are valid to report. But keep in mind that an increase in odds than in fact means an increase in odds of being in the lower category rather than the higher! But that's only if you have an ordinal dependant variable.

If you want to know the increase in percentage, well take a fictive odds-number, let's say 100 and multiply it by 1.21 which is 121? Compared to 100 how much did it change percentage wise?

Say that exp(b) in an mlogit is 1.04. if you multiply a number by 1.04, then it increases by 4%. That is the relative risk of being in category a instead of b. I suspect that part of the confusion here might have to do with by 4% (multiplicative meaning) and by 4 percent points (additive meaning). The % interpretation is correct if we talk about a percentage change not percentage point change. (The latter would not make sense anyhow as relative risks aren't expressed in terms of percentages.)

Not the answer you're looking for? Browse other questions tagged multinomial-distribution or ask your own question.