I am figuring out the best way to find clusters for a dataset with observations that are densely packed together. The dataset is retail stores with three numeric variables based on operations metrics.

I do not know how to create a simulated dataset for an example like this. I have densely clustered data and outliers, but under 4k observations.

We need to separate the dataset into groups based on several variables.

The goal is to narrow down the stores with greater priority. Later on, we will use inference statistics for determining the cause of the operation metrics stated. Segmenting the stores based on priority makes sense through the three operations variables included.

Clustering with all three variables: -same procedure as above.

Overview: After selecting the optimal number of clusters for each clustering method and comparing the best one using dunn-index, the results have overlap.

What is the recommended method for performing cluster analysis on densely clustered datasets? Do I need to perform clustering multiple times in order to segment the data further? 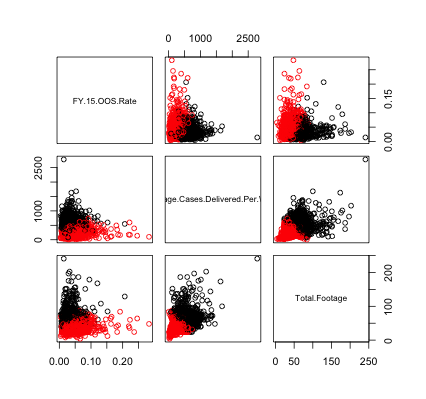 As @Anony-Mousse implies, it isn't clear right now that your data actually are clusterable. In the end, you may choose to simply chop your data into partitions, if that will serve your business purposes, but there may not be any real latent groupings.

From where I sit, I cannot provide any guaranteed solutions, but perhaps I can offer some suggestions that will be profitable:

Not the answer you're looking for? Browse other questions tagged r clustering or ask your own question.

39
What is the relationship between $Y$ and $X$ in this plot?
26
How to test if my distribution is multimodal?
21
How to understand the drawbacks of Hierarchical Clustering?
6
Fuzzy K-means - Cluster Sizes
2
When would I use EM instead of k-means?

0
K-medoids clustering with Gower distance in R
3
How can we say that a clustering quality measure is good?
1
Clustering issues
3
Find optimal number of clusters before clustering or independent of clustering algorithm
0
How to interpret contrasting information from the Variation of Information, Dunn and Rand Index for comparing clusterings
1
Clustering - Different algorithms, same results