Choosing between count and linear “fixed effects” models when within-variation is not skewed?

I'm using multilevel modeling to test hypotheses about "within group" relationships, without any need to make assumptions about variation between them. For that reason, I'm opting for a "fixed effects" model. Theory would lead us to use a multilevel count model, and overall analysis of the dependent variable supports the claim. The skew of the variable is 231.49 and its kurtosis is 77899.

Here's the log-transformed distribution of the dependent variable: 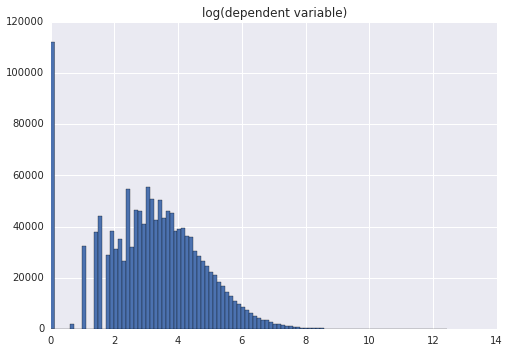 However, when we look at the within-group variation, the distributions have skewness closer to 0. Here is a histogram of the per-group skewness for a subset of groups: 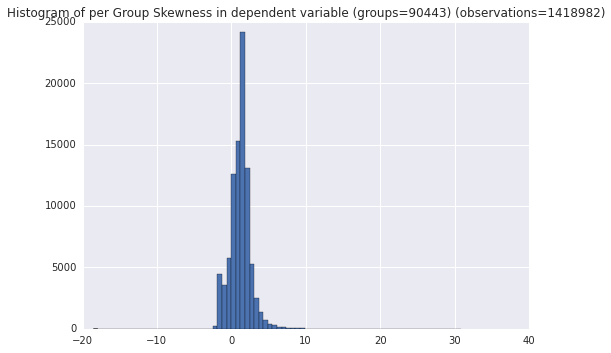 In my humble opinion, it doesn't matter what the larger population looks like as you state you are concerned with in-group analysis.

Assuming that each group is correctly and consistently tagged, one could treat those as segments and create a unique model for each group. This is commonly done.

This is similar to what CART does. It divides up the population first by a tree and then has regression models at the ends of the branches.

Remember Box wrote: "The most that can be expected from any model is that it can supply a useful approximation to reality: All models are wrong; some models are useful".

As for your exact question, I recommend trying both and see which one performs better*. It is not uncommon to find that a model performs better under a distribution that it doesn't "belong".

As for better, you must use heuristics that matter to the real world. So avoid R squared.

Rather than the distributions themselves, the assumption about the shape of the error term is what should guide you to the appropriate link function, whether it is the identity link or some other link.

Because we cannot look at the true error, the next step would be to create model with your predictor under the linear/identity link and plot the residuals. The outcome variable should be in its original metric rather than log-transformed. Are they skewed such that you would consider them Poisson distributed or some other distribution? If so, then the identity is inappropriate and you need to switch to a log link.

The last piece you can use to aid in your decision making would be model fit. If you fit a model first with the identity link and second with the log link, what are the values of the deviance or AIC?

Not the answer you're looking for? Browse other questions tagged multilevel-analysis fixed-effects-model negative-binomial or ask your own question.