At the following figure at left side two realizations of point processes with different density (intensity) $\lambda_1$ and $\lambda_2$ is being mixed matching the center of the belonging areas to build a point process in the middle with intensity $\lambda$. Then randomly selected points as two sets extracted from it as shown at the right side.
Questions:
Is $\lambda=\lambda_1+\lambda_2$? and Is $\lambda=\lambda_3+\lambda_4$?
If two at left side were Poisson PP, Is the middle one a Poisson PP?
How about the two at right hand side? 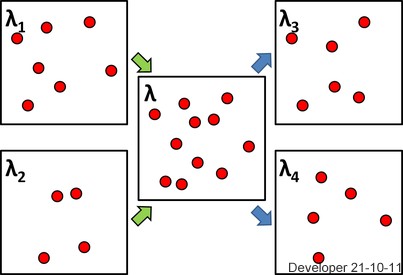 To answer this question we need a little background and notation. In the general terminology let $N$ denote a of point process in the plane, which means that for any Borel set, $A$, in the plane, $N(A)$ is an integer valued (including $+\infty$) random variable, which counts the number of points in $A$. Moreover, $A \mapsto N(A)$ is a measure for each realization of the point process $N$.

Associated with the point process is the expectation measure $$A \mapsto \mu(A) := E(N(A))$$ where the expectation is always well defined, since $N(A) \geq 0$, but may be $+\infty$. It is left as an exercise to verify that $\mu$ is again a measure. To avoid technical issues lets assume that $\mu(\mathbf{R}^2) < \infty$, which is also reasonable if the process only really lives on a bounded set such as the box in the figure that the OP posted. It implies that $N(A) < \infty$ a.s. for all $A$.

It is natural to ask if we could thin independently without assuming that the $Z_i$'s are identically distributed and obtain similar results. This is possible, but a little more complicated to formulate, because the distribution of $Z_i$ then has to be linked to the $X_i$ somehow. For instance, $P(Z_i = 1 \mid N) = p(x_i)$ for a given function $p$. It is then possible to show the same result as above but with the intensity $p\lambda$ meaning the function $p(x)\lambda(x)$. We skip the proof. The best general mathematical reference covering spatial point processes is Daley and Vere-Jones. A close second covering statistics and simulation algorithms, in particular, is Møller and Waagepetersen.

Not the answer you're looking for? Browse other questions tagged poisson-distribution point-process or ask your own question.