I have a huge data set that is probably hundreds of millions of rows. This data follows a very skewed power law distribution. Consider the X-axis to be products and the Y-axis to be revenue from products. Almost 95% of revenue would come from 1% of the products. The distribution looks like this: 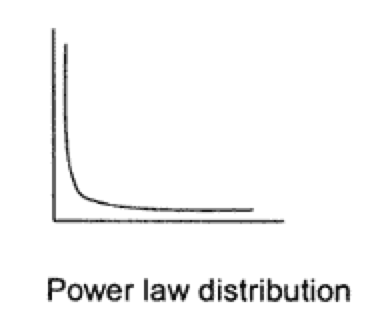 I want to generate a random sample from this distribution which approximates the original distribution.

All this data is in a huge oracle DB. I see that Oracle SQL has DBMS_RANDOM.VALUE [link] which generates pseudo-random numbers.

What should my sample size be in order to come close to the original data set. Consider original dataset to be 100million rows.

This is an answer to the question 3: how to sample from a power-law distribution. The answer is based on the article pointed by @Sycorax: Power-Law Distributions in Empirical Data by Clauset et al. 2009. The article discusses synthetic random samples in Appendix D: Generating power-law distributed random numbers somewhere around page 38. I will write the math in Python-like pseudocode.

The appendix describes the use of the transformation method. The method is commonly used to generate samples from various distributions. Two things needed are a uniformly distributed random source r where 0 <= r < 1 and the functional inverse of the cumulative density function (CDF) of the power-law distribution. The source r is simply given as a parameter to the CDF.

Let us start from the probability density function p(x) of a continuous power-law distribution. Let x_min be the lower bound and alpha be the scaling parameter of the distribution. Syntax a**n denotes exponentiation a^n. The PDF can be given as:

The cumulative density function, CDF can be given as:

The inverse of CDF:

Thus, to generate a power-law distributed sample x_smp in Python:

To sample from discrete distribution the article proposes an approximation which uses the continuous method above but rounds the result to the nearest integer:

This approximation performs the better the larger is x_min. For distributions where x_min < 5 a more accurate but more complicated method should be used, as recommended in Appendix D.

Not the answer you're looking for? Browse other questions tagged distributions random-generation power-law or ask your own question.