How to condition a marked point processes?

Figure (i) demonstrates a field being studied in which only some samples in some regions are available. Some regions therefore are unsampled and unknown. As described above we generate a marked point process to get a model describing the phenomenon in entire space. Figure (ii) is the result. As it can be seen the left hand side of (ii) does not match the existing samples. There are indeed generated stochastically. figure (iii) demonstrates the final goal in which a full map of the phenomenon has been modeled in entire space conditioned to the existing samples at the left hand side.
Question: How can we do it?
Note: The conditional modelling referred to conditional simulations those are common in geostatistics cannot be applied for this case at least directly. For example, a grade estimation made by Kriging or IDW is already conditioned to the existing samples. This is because an interpolation (weighted averaging) is being used for estimation which makes sense for grade. However for the case being studied here, there is no such understanding for variation of angle (as one of variables of interest). Furthermore, the output of the estimations/simulations in geostatistics etc is often a full grid which means you have a point very close to the sampling point. Indeed the location itself is not considered as variable while for PP stochastic generated locations are the base. The marks also are generated by means of stochastic models where again cannot be adjusted regarding to nearby samples.

Updates: of course an answer is of interest if you don't mind! 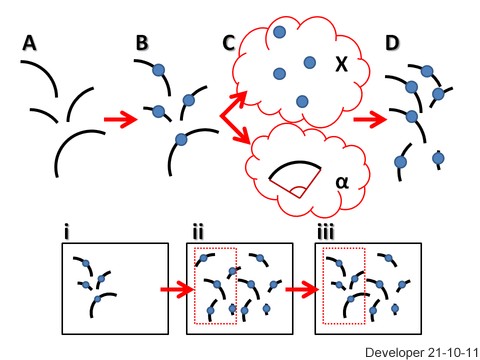 Browse other questions tagged stochastic-processes point-process or ask your own question.