Could anyone elaborate on a theoretical perspective of K-fold cross-validation and especially a mathematical formula for k-fold CV prediction error?

Updated:Could any one of you help me to understand the formula written on latest edition (Feb, 2011) of the book at page 242. 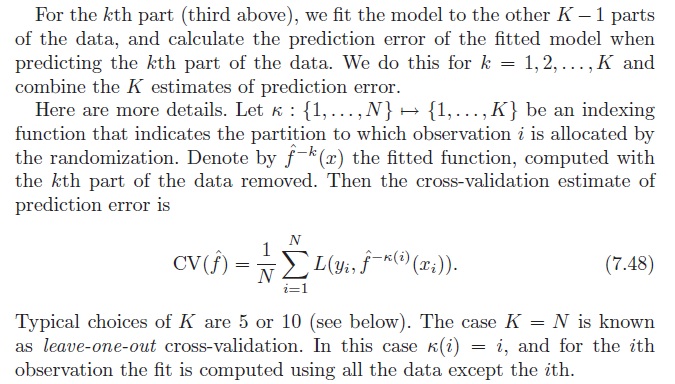 There are formulae for computing the leave-one-out cross-validation error in closed form for many models, including least-squares regression, but as far as I am aware there isn't a general formula for k-fold cross-validation (or at least it may be possible but the computational advantage is too small to be worthwhile).

The formula in the book isn't saying very much it is just saying that the cross-validation error is the average of the loss function (L) evaluated using models trained on different subsets of the data. The superscript $-\kappa(i)$ just means "model $f$ is trained without the training patterns in the same partition of the dataset as pattern $i$". Sometimes writing things in formal mathematical notation makes things less ambiguous, but it doesn't necessarily make it any easier to understand than the text - I think this is one of those occasions.

The truth is that cross-validation is simply a heuristic for model selection. If what you are really looking for is obtaining a theoretically-backed estimate of your generalization prediction, cross-validation can only give a good estimate of it but there are no guarantees. A better fit for that would be learning theoretical frameworks such as the PAC-Bayes setting. However those frameworks have their own short-comings, mostly related to the fact that bounds tend to be to loose/general (for example a bound telling you that you're not going to predict wrong more than 100% of the time).

However some people have tried to formalize the cross-validation heuristic. You may want to take a look at the references in this post from John Langford. http://hunch.net/?p=29