There are 2 increases in magnitude (one between feb and march, and one at the beginning of september)

(the chart has daily resolution btw)

How is this operation usually called ? How do people usually do this, is it just this sort of scaling or is there a more correct(and perhaps more sophisticated) approach for this ?

What would you use for adjusting this time-series in either R or Python and statsmodels ? Is there a worked out example of this somewhere that I could read or could you describe one here ?

(The two increases have a common cause. The chart shows counts of certain posts on a website. At the times of the two increases, there was a new roll-out of a collector and as a result, more data started coming in. So the scaling I'm trying to do is trying to estimate how the time-series would have looked prior to the increases if the current collection were in place from the beginning, from January 2015)

Detecting and incorporating Level Shifts (Step Shifts) is an integral part or both non-causal and causal modelling. The term Intervention Detection is often used. Some software implementations restrict identification to non-causal models while others do not. See http://www.unc.edu/~jbhill/tsay.pdf for a seminal article and search here for relevant posts using the string "intervention detection" . Typical output would include "what the series would have looked like without the intervention" . These are often called the "adjusted values" .

There may be a "de facto date" and a "de jure date" to the intervention, often coinciding but sometimes not due to dynamics in the series. If one knows the start date then one can simply add an indicator variable ( 0,0,0,0,1,1,1,1..) to reflect that knowledge and then use the estimated coefficient for that variable as the adjustment factor.

If you knew that an intervention had occurred at a particular point in time you could estimate a model of the form where I is the 0/1 intervention variable is used in conjunction with the ARIMA component.

For example if you had a pulses at two points in time (39 and 21) the augmented data matrix might look like . 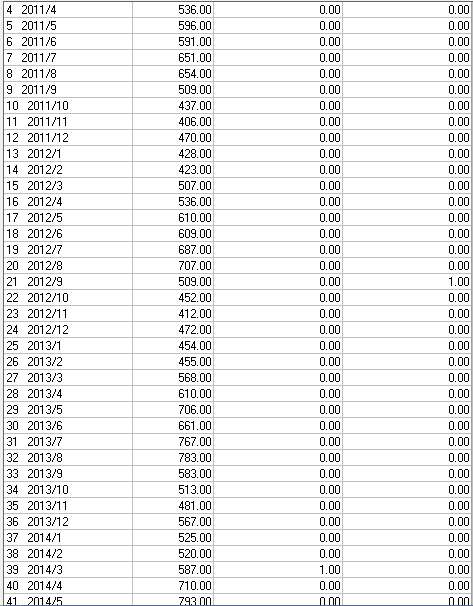 Not the answer you're looking for? Browse other questions tagged r time-series adjustment statsmodels or ask your own question.

2
What are the characteristics of this time series?
1
How to test if chart patterns occure systematic or are just random artifacts in a price-time series?
1
How to reason about causal effect in time series when the treatment group reacts even before treatment?
1
How to increase time resolution of a time series on specific days?
5
How should I test for relationship between two variables if there exists a lag?
9
The fallacy of correlating some time series values with specific time points: is there a specific name for it or are there references?