I am looking to predict the number of shots that are going to be made by soccer players in their next game.

Currently, I use multiple linear regression, where I regress my entire data set (shotdata) for all c.300 players at once, with the following explanatory variables

po = possession during the games

ha = dummy variable whether the player is playing home or away

I then predict one observation , for each player, after plugging in relevant values for (predicted) possession and whether the player is playing home/away.

I am looking to improve my model, however, given that shots are count data and seem to exert a Poisson distribution (see http://imgur.com/LDSZSDE): 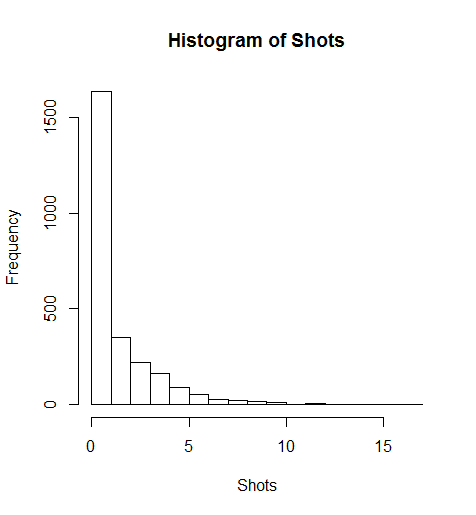 I have tried using a Poisson regression model, such that:

On an initial, layman, inspection of the results, however, this model does not seem to offer an improvement in prediction. The response residuals it is generating are about 15% higher than those from the multiple linear regression and simple eyeballing of the predictions suggests they are not as strong as those from the multiple linear regression.

Might this not be an appropriate application of the Poisson regression? Is there something I’m obviously doing wrong with the Poisson distribution? Are there other methods for determining the comparative strengths of the model I should look at?

I've tried to keep this question concise with relevant information only, but please let me know if I can expand on any of it.

A couple of thoughts that may or may not help below. It's a bit hard for us to be helpful without seeing your actual data...

Not the answer you're looking for? Browse other questions tagged multiple-regression count-data poisson-regression or ask your own question.

35
Why is Poisson regression used for count data?