It would depend on the nature of the heteroskedasticity. If you wanted a prediction interval, you usually need a parametric specification like:

Examples of possible functions include; $\sigma^2_i(\mathbf{x}_i)=\sigma^2x_{i,k}$ (Studies of firm profits, an example from Greene's "Econometric Analysis" 7th edition CH 9), where $x_{i,k}$ is the $i^{th}$ observation of the $k^{th}$ dependent variable, or, if working with time series data, GARCH and/or stochastic volatility specifications.

You can use the estimates $\hat \sigma_i(\mathbf{x}_i,\mathbf{z}_i )$ as the standard errors for your prediction intervals if you like. I will forgo a formal treatment here because accounting for estimation errors in $\hat \sigma_i(\mathbf{x}_i,\mathbf{z}_i )$ can be complicated but, with a sufficiently large sample, ignoring the estimation error does not effect the prediction interval that much. In short, it is not necessary to open that can of worms here. For a more detailed explanation of all this and more examples, see Wooldridge's book "Introductory Econometrics: A Modern Approach", Ch 8.

The problem is that when people refer to heteroskedastic or "robust" regression, they are usually referring to the situation in which the precise nature of the heteroskedasticity (the function $\sigma_i(\mathbf{x}_i,\mathbf{z}_i )$) is not known, in which case a White or two-step estimator is used. These offer consistent estimates for $var(\hat \beta)$ but not for the $\sigma_i$, and so you have no naturally way to estimate prediction intervals. I would argue that prediction intervals are not meaningful in this context anyway. The idea behind these sandwich type estimators is to consistently estimate the standard error of the coefficients, $\hat \beta$, without the burden of offering accurate prediction intervals for each individual observation, thus making the estimates more "robust".

Just to be clear, the above only considers least squares regression. Other forms of non-parametric regression, such as quantile regression, may offer means of obtaining a prediction interval without parametric specification of residual standard error.

UPDATE: A reasonable approximation for a 90% prediction interval is the space between the 5th-percentile regression curve and the 95th-percentile regression curve. (Depending on the details of the curve estimation technique and the sparsity of the data, you might want to use something more like the 4th and 96th percentiles to be "conservative"). Intuition for this type of nonparametric prediction interval is here on wikipedia.

(if your nonconstant variance is more extreme) as your weight. This weights your variance by your x value, so that there's a proportional relationship.

Here's code with the weights included in the model and prediction. Notice that you need to add the weights to both your original dataset and your new dataset.

Thanks to @PopcornKing for his original code from Calculating prediction intervals from heteroscedastic data. 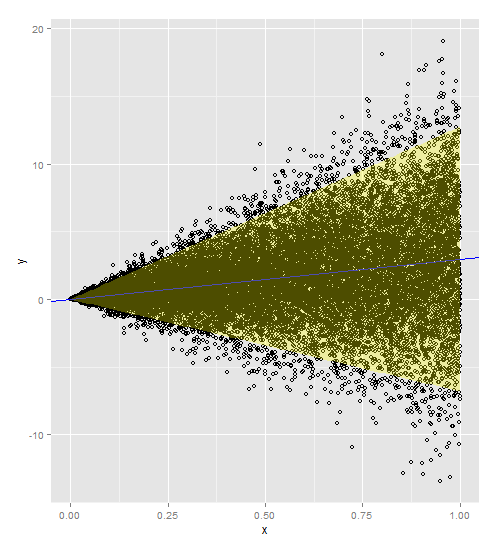 Not the answer you're looking for? Browse other questions tagged r regression least-squares heteroscedasticity prediction-interval or ask your own question.