I understand (I think!) the concept of confidence interval as it applies to hypothesis testing and statistical inference.

What is the hypothesis in linear regression that we are looking to accept/reject? Is it the assumption that the residuals have 0 mean?

It's hard to step in when you had people commenting of the caliber of the names above, but I did tried to understand this the silly way... Using the power of [R] to simulate mathematical problems. So I hope it sheds some light into what these uncertainty quantifications attached to the regression parameters mean - that was the question...

So from the perspective of the frequentist there is this Platonic world of absolute representation of every single individual - the population, and we are looking at the shadows on the wall of the cave - the sample. We know that no matter how much we try we'll be off, but we want to have an idea of how far we'll be from the truth.

From this population we will take $100$ samples. For each sample, we will randomly select $100$ rows of data from the dataset. Let's define the function for sampling rows:

Notice that we are no longer in paradise - now we have noise (rnorm).

And we are going to collect both the intercepts and the slopes (I'll call them betas) of the OLS linear regression run on each one of these $100$ samples. Let's write some lines of code for this:

And combine both into a new data.frame: reg_lines <- data.frame(intercepts, betas). As expected given the normal randomness of the noise the histogram of the slopes will be gaussian looking: 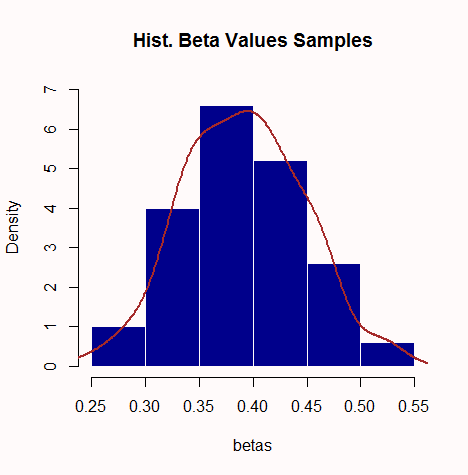 And if we plot all the regression lines that we fitted in each single one of the $100$ samples from the rows in the population we'll see how any single one is just an approximation, because they do oscillate between a maximum and a minimum in both intercept and slope. This is what they look like: 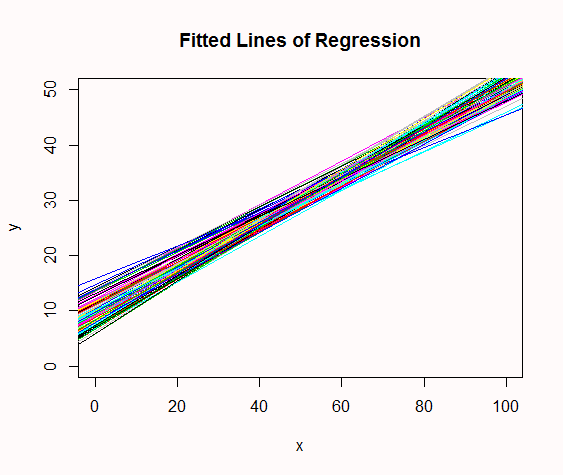 Since we are playing god, let's plot our biased sample (dark blue dots of the with dark blue fitted regression line) together with the true line in solid green, and the maximum and minimum combinations of intercepts and slopes we got in our simulation (dashed red lines), giving us an idea of how off we could possibly be from the true line): 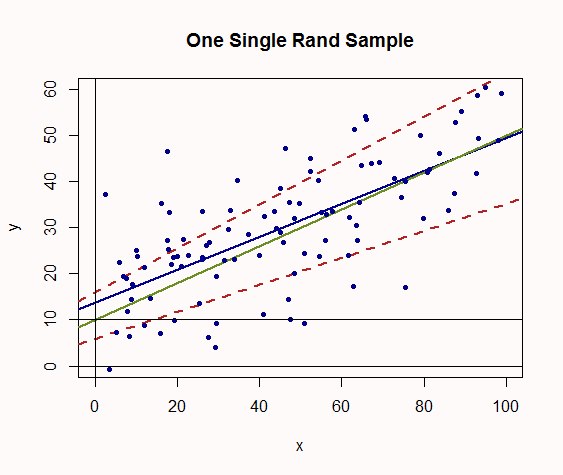 Let's quantify this possible error using a Wald interval for the slopes to generate the 5% confidence interval:

Finally, let's compare these values by those generated by [R] when we type:

OK, so this is a very intuitive approach at seeing what the confidence intervals are trying to answer. And as for the $p$-values, you can read how they are generated here. In general, the text notes that if the regression coefficient in the population is $0$ ($H_o: \beta = 0$) the $t$-statistic will be:

The $SE_{\hat\beta}$ (which we used in the Wald interval) can be calculated in different ways, although the formula given in the text quoted is:

0
understanding of method for confidence interval in regression
24
Why is the normality of residuals “barely important at all” for the purpose of estimating the regression line?
20
Why do we assume that the error is normally distributed?
3
Prove f statistic in ANOVA multiple regression equals t statistic in linear regression