This question is more of theoretical. I am not sure if this is the right place, but still giving it a try.

My question is that in case of simple linear regression, in general, should we expect better prediction accuracy if dependent and independent variables are highly correlated or is it my misconception? If we expect good accuracy, am I missing something here. Please note that I have also tried centering these variables around mean.

which in your case should be 0.03 (because $R^2$ is 0.97). But what you did (I guess :) ) is that you computed the root mean error divided by the standard deviation of the output wich is exactly $\sqrt{Error}$ (according to my definition).

Your results are perfectly correct and conform to the theory because

I think I know what's going on. Intuitiviely, your method of calculating prediction error seems OK - You take the residual value (i.e error) and see how big it is relative to your data (i.e., relative to either the predicted value or the value of your dependent variable) by dividing by that value. However, there's at lease one issue with calculating error in this way that I can think of: When you divide by the value of the dependent variable, you are expecting the divisor not be close to zero - when it is, your residual/(actual value) can become huge, simply because the actual value may be a fraction (i.e., close to zero...e.g., .005). I ran the following simulations and confirmed my suspicion:

As you can see in the plot below, your method of error does not increase as a function of Rsquared (which is an issue in itself, though I'm not 100% sure on why this is happening)...The issue that I focused in on had to do with the outliers in the below graph. 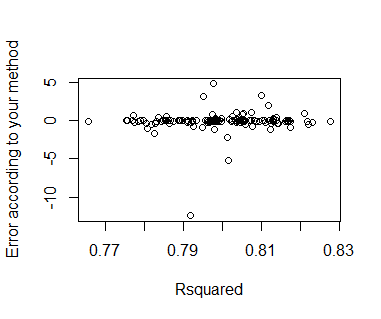 ...Those points generally occur when the mean of the predictor variable is close to zero, as can be seen in the below graph: 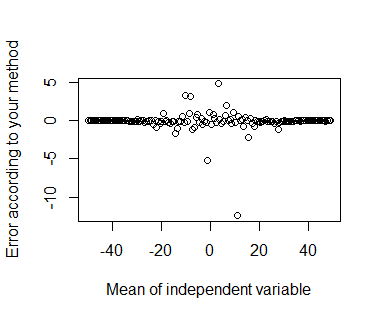 To conclude, I suggest you use a more standard version of model fit/prediction error such as the mean squared error (MSE) or the rquared.

Not the answer you're looking for? Browse other questions tagged r correlation regression or ask your own question.

3
Simulating or generating datasets for testing modelling methodologies
1
Regression confidence on new data point
4
Good machine learning algo for partial derivatives?
2
What is the best practices/way to do a linear regression on highly correlated variables
0
Simple linear regression vs. partial least squares (PLS)
2
Is a linear correlation between logs useful for making predictions with a regression model?
1
Standardization and test prediction in linear regression