What's so 'moment' about 'moments' of a probability distribution?

I KNOW what moments are and how to calculate them and how to use the moment generating function for getting higher order moments. Yes, I know the math.

Now that I need to get my statistics knowledge lubricated for work, I thought I might as well ask this question - it's been nagging me for about a few years and back in college no professor knew the answer or would just dismiss the question (honestly).

So what does the word "moment" mean in this case? Why this choice of word? It doesn't sound intuitive to me (or I never heard it that way back in college :) Come to think of it I am equally curious with its usage in "moment of inertia" ;) but let's not focus on that for now.

So what does a "moment" of a distribution mean and what does it seek to do and why THAT word! :) Why does any one care about moments? At this moment I am feeling otherwise about that moment ;)

PS: Yes, I've probably asked a similar question on variance but I do value intuitive understanding over 'look in the book to find out' :)

According to the paper "First (?) Occurrence of Common Terms in Mathematical Statistics" by H.A. David, the first use of the word 'moment' in this situation was in a 1893 letter to Nature by Karl Pearson entitled "Asymmetrical Frequency Curves".

Neyman's 1938 Biometrika paper "A Historical Note on Karl Pearson's Deduction of the Moments of the Binomial" gives a good synopsis of the letter and Pearson's subsequent work on moments of the binomial distribution and the method of moments. It's a really good read. Hopefully you have access JSTOR for I don't have the time now to give a good summary of the paper (though I will this weekend). Though I will mention one piece that may give insight as to why the term 'moment' was used. From Neyman's paper:

It [Pearson's memoir] deals primarily with methods of approximating continuous frequency curves by means of some processes involving the calculation of easy formulae. One of these formulae considered was the "point-binomial" or the "binomial with loaded ordinates". The formula
differs from what to-day we call a binomial, viz. (4), only by a factor $\alpha$, representing the area under the continuous curve which it is desired to fit.

This is what eventually led to the 'method of moments.' Neyman goes over the Pearson's derivation of the binomial moments in the above paper.

And from Pearson's letter:

We shall now proceed to find the first four moments of the system of rectangles round GN. If the inertia of each rectangle might be considered as concentrated along its mid vertical, we should have for the $s^{\text{th}}$ moment round NG, writing $d = c(1 + nq)$.

This hints at the fact that Pearson used the term 'moment' as an allusion to 'moment of inertia,' a term common in physics.

Here's a scan of most of Pearson's Nature letter: 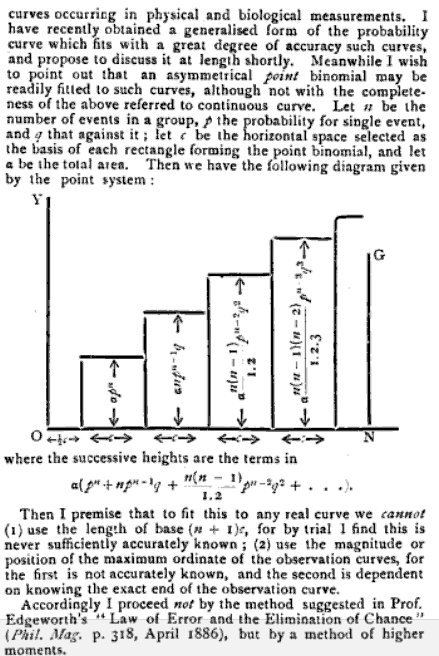 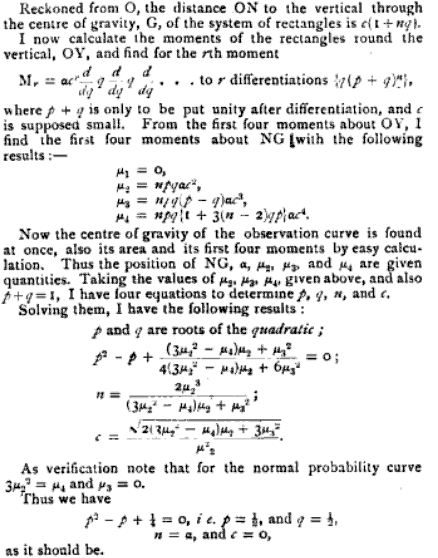 You can view the entire article on page 615 here.

Everybody has its moment on moments. I had mine in Cumulant and moment names beyond variance, skewness and kurtosis, and spent some time reading this gorgious thread.

Oddly, I did not find the "moment mention" in " H. A. David's paper. So I went to Karl Pearson: The Scientific Life in a Statistical Age, a book by T. M. Porter. and Karl Pearson and the Origins of Modern Statistics: An Elastician becomes a Statistician. He for instance edited A History of the Theory of Elasticity and of the Strength of Materials from Galilei to the Present Time.

His background was very wide, and he was notably a professor of engineering and elastician, who was involved in determining the bending moments of a bridge span and calculating stresses on masonry dams. In elasticity, one only observe what is is going on (rupture) in a limited manner. He seemingly was interested in (from Porter's book):

graphical calculation or, in its most dignified and mathematical form, graphical statics.

From the beginning of his statistical career, and even before that, he fit curves using the "method of moments." In mechanics, this meant matching a complicated body to a simple or abstract one that had the same center of mass and "swing radius," respectively the first and second moments. These quantities corresponded in statistics to the mean and the spread or dispersion of measurements around the mean.

Pearson dealt in discrete measurement intervals, this was a sum rather than an integral

Inertial moments can stand for a summary of a moving body: computations can be carried out as if the body was reduced to a single point.

Pearson set up these five equalities as a system of equations, which combined into one of the ninth degree. A numerical solution was only possible by successive approximations. There could have been as many as nine real solutions, though in the present instance there were only two. He graphed both results alongside the original, and was generally pleased with the appearance of the result. He did not, however, rely on visual inspection to decide between them, but calculated the sixth moment to decide the best match

Let us go back to physics. A moment is a physical quantity that takes into account the local arrangement of a physical property, generally with respect to a certain ordinal point or axis (classically in space or time). It summarizes physical quantities as measured at some distance from a reference. If the quantity is not concentrated at a single point, the moment is "averaged" over the whole space, by means of integrals or sums.

Apparently, the concept of moments can be traced back to the discovery of the operating principle of the lever "discovered" by Archimedes. One of the first known occurrence is the Latin word "momentorum" with the present accepted sense (moment about a center of rotation). In 1565, Federico Commandino translated Archimedes' work (Liber de Centro Gravitatis Solidorum) as:

The center of gravity of each solid figure is that point within it, about which on all sides parts of equal moment stand.

So apparently, the analogy with physics is quite strong: from a complicated discrete physical shape, find quantities that approximate it sufficiently, a form of compression or parsimony.

Question: So what does the word "moment" mean in this case? Why this choice of word? It doesn't sound intuitive to me (or I never heard it that way back in college :) Come to think of it I am equally curious with its usage in "moment of inertia" ;) but let's not focus on that for now.

Answer: Actually, in a historical sense, moment of inertia is probably where the sense of the word moments comes from. Indeed, one can (as below) show how the moment of inertia relates to variance. This also yields a physical interpretation of higher moments.

Less confusing than the names usually given, e.g., hyperflatness etc. for higher moments would be moments from circular motion e.g., moments of inertia for circular motion, of rigid bodies which is an simple conversion. Angular acceleration is the derivative of angular velocity, which is the derivative of angle with respect to time, i.e., $ \dfrac{d\omega}{dt}=\alpha,\,\dfrac{d\theta}{dt}=\omega$. Consider that the second moment is analogous to torque applied to a circular motion, or if you will an acceleration/deceleration (also second derivative) of that circular (i.e., angular, $\theta$) motion. Similarly, the third moment would be a rate of change of torque, and so on and so forth for yet higher moments to make rates of change of rates of change of rates of change, i.e., sequential derivatives of circular motion. This is perhaps easier to visualize this with actual examples. 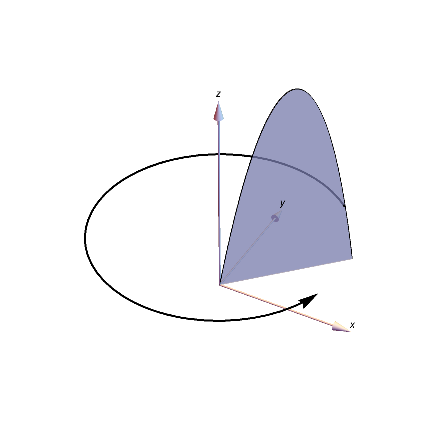 Note that there is nothing preventing us from moving the beta distribution thin sheet to another location and re-scaling it, e.g., from $0\leq r\leq1$ to $2\leq r\leq4$, or changing the vertical shape, for example to be a paddle rather than a hump. 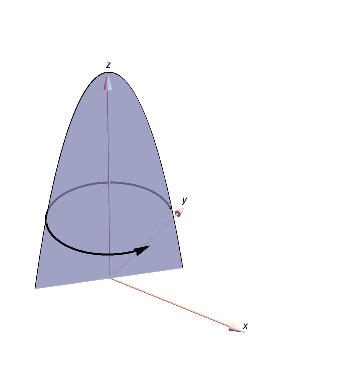 What if we want to calculate backwards, that is, take a 3D solid object and turn it into a probability function? Things then get a bit trickier. For example, let us take a torus. 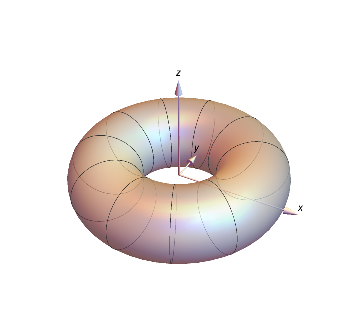 First we take its circular cross section, then we make it into a half ellipse to show the density of any flat coin like slice, then we convert the coin into a wedge-shaped coin to account for the increasing density with increasing distance ($r$) from the $z$-axis, and finally we normalize for the area to make a density function. This is outlined graphically below with the mathematics left to the reader. 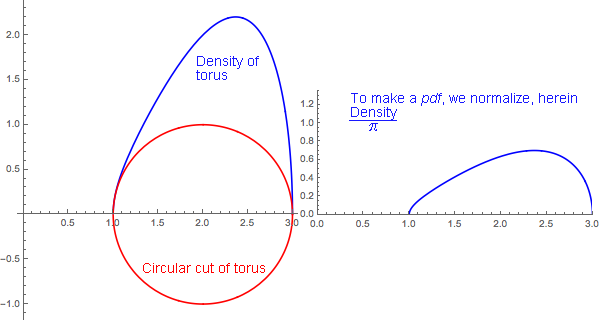 Finally, we ask how these equivalences relate to motion? Note that as above the moment of inertia, $I$, can be made related to the second central moment, $\sigma^2$, A.K.A., the variance. Then $I=\dfrac{\tau}{a}$, that is, the ratio of the torque, $\tau$, and the angular acceleration, $a$. We would then differentiate to obtain higher order rates of change in time.

Not the answer you're looking for? Browse other questions tagged distributions terminology moments intuition or ask your own question.

13
Why is a moment called a moment?
1
Are moments related to moments in physics?
13
Etymology of “t” in t-test and t-distribution
6
what is the meaning of 'tail' of kurtosis?
11
intuition for moments about the mean of a distribution?
8
How to understand moments for a random variable?
10
Higher-order cumulant and moment names beyond variance, skewness and kurtosis
14
Physical/pictoral interpretation of higher-order moments
3
Why moments of expectation are known as “moments”

6
Moments of Laplace distribution
2
Why the first moment is standardized before computing higher moments, but higher moments are not?
11
intuition for moments about the mean of a distribution?
6
What is “t” in generating functions?
0
Moment of Z (about 0) in Arcsine distribution
20
Is there any intuitive explanation of why logistic regression will not work for perfect separation case? And why adding regularization will fix it?