If $X_1$ and $X_2$ are dependent identically distributed, can we show that

For i.i.d, it is obvious, but what if they are dependent?

No, we can't. Counterexamples are simple to construct.

e.g. consider a bivariate distribution on $(0,1)^2$, and split the unit square up into 4x4 subregions, only some of which have any probability. Within sub-regions that have probability, make the density in each sub-region uniform (the same number need to be occupied in every "row" and "column"), such that they all have the same density. If you choose the "occupied" subregions intelligently, you can get the probabilities you ask about to be plainly unequal, as here: 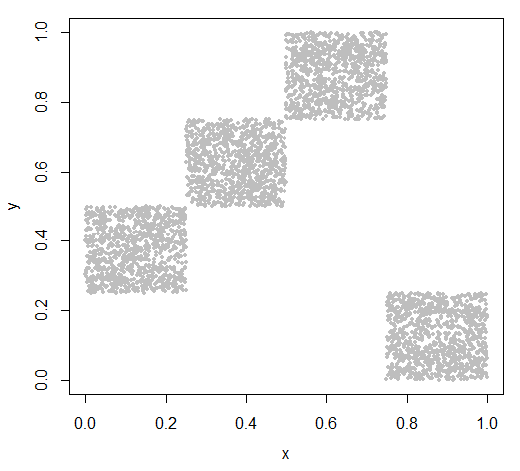 Clearly the margins are both U(0,1), yet the probabilities you mention are 3/4 and 1/4 by inspection (aside from single points, which have probability 0, the entirety of the 3 upper blocks is above the diagonal and the remaining block below it).

(The points I make in my demonstrations here could be made rigorous, but I think the intuition will be better conveyed if I stick to pictures and general reasoning.)

Just as plainly, this example applies to other continuous marginal distributions with montonic increasing cdf $F$, simply by applying a monotonic transformation $t(X) = F^{-1}(X)$ to these variates (which doesn't change the probabilities involved). [The existence of such simple counterexamples doesn't only apply to that case, it's just that the above argument generalizes to it especially easily.]

e.g. here's the above example transformed so that the margins are both standard normal: 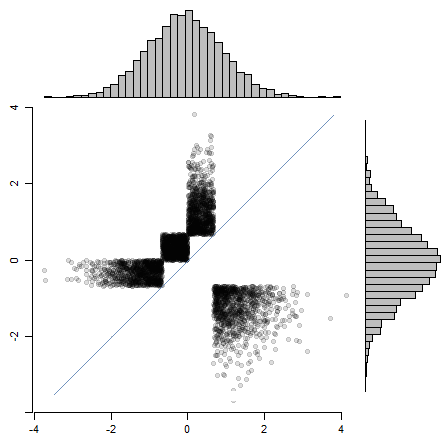 By using a similar trick, you can make the probabilities arbitrarily far apart (with the restriction that they stay in (0,1) ).

For example, I could as easily split into a 100x100 subgrid and put 99 of the occupied subcells above the diagonal, and only one below it, for a 99%-1% split.

Here's a different bivariate distribution with uniform margins that I then transform to exponential:

If you're happy to consider degenerate bivariate distributions, it's even easier to come up with examples. Choose $X_1$ uniform on (0,1) and let $X_2 = X_1+a \mod 1$, choosing $a$ to be any convenient small number. 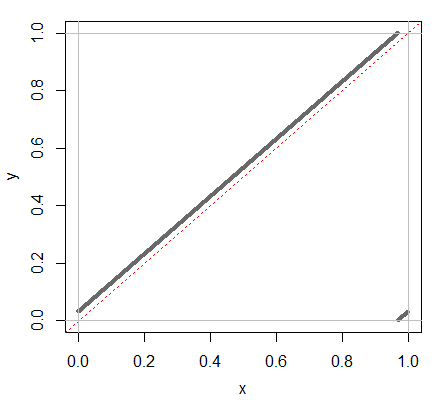 You may find it instructive to investigate copulas, which are multivariate distributions with uniform margins.

But you can find even weaker condition that exchangeability I think.

Not the answer you're looking for? Browse other questions tagged probability non-independent copula bivariate iid or ask your own question.

5
An example of a bivariate distribution with normal marginals and a nonlinear conditional mean curve?