How is the determinant of $(X'X)$ related to variance?

I'm working on a problem (and actually have the answer) but I don't know why this is the answer, can someone explain this equality?. It has to do with the the determinant of the partitioned matrix $(X'X).$

which is fairly obvious by the partitioned matrix

b though is harder.

With the information below, I am able to solve this problem, but why does the equality below hold? 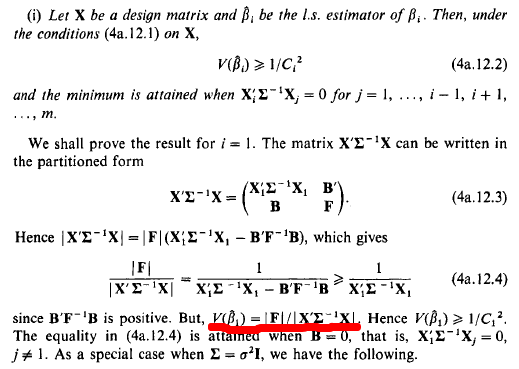 the part i have underlined was just a given and I'm not sure what the deal is with it, could anyone explain to me how determinant and variance are connected like this?

This is a result of using Cramer's rule to calculate the inverse of $\mathbf{X}^{\prime}\Sigma^{-1}\mathbf{X}$.

Cramer's rule is a very ineffective way of computing an inverse compared to standard methods. This rule usually pops up in situations like these, where one needs an expression for a specific element in the inverse.

Not the answer you're looking for? Browse other questions tagged generalized-linear-model variance regression-coefficients matrix determinant or ask your own question.

27
Wald test in regression (OLS and GLMs): t- vs. z-distribution
1
What's special about (x'x-x'Proj(w)x)?
5
Matrix inverse not able to be calculated while determinant is non-zero
2
Probability of at least one triangle in Erdos-Renyi graph
3
Decrease of $(X'X)^{-1}$ as n increases
10
Why is the variance of 2SLS bigger than that of OLS?
1
Gaussian process - Why adding data points cannot increase the predictive bias?