Modeling a Classification Problem with an Undirected Graphical Model

I have an undirected graphical model problem which I'm looking for some help on.

So, the goal is to perform multivariate classification: based on a set of observations, I want to predict the correct class. Let us first consider that there are four observations, $a,b,c,d$: 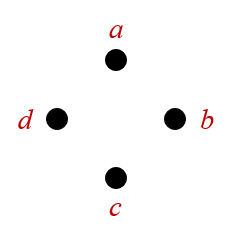 Now, for each pair of observations, I have trained a classifier which outputs a class probability distribution based on these two observations. For example, for observations $a$ and $b$, I know $p(y|a,b)$: 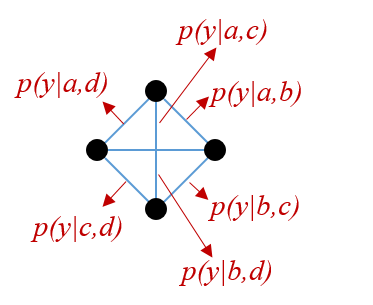 What I now want to enforce, is that all observations are actually from the same class. So, I want $p(y|a,b)$ to be high for one class, and $p(y|c,d)$ to also be high for that class, as well as $p(y|b,c)$, and so on. In this way, I could represent each pair of observations as a single node in a graphical model, and make the model fully connected: 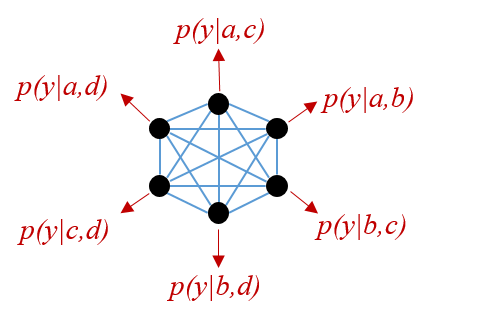 My questions is: How do I find the most likely class, $\hat{y}$? Formally, I want to solve the following:

So I basically want to take a set of "weak" classifiers, and create a "strong" classifier. By modeling it as a graphical model, the "energy" of the model could be represented by (i) the probability distributions for each pair of observations, and (ii) the pairwise terms which enforce that all observations are assigned to the same class.

Any ideas on how to do this? It reminds me of a Markov Random Field, except that (i) it is fully connected, and (ii) the pairwise cost for having different class assignments is infinite.

5
Where does advanced probability theory/stochastics come into machine learning?