Why do you put all the exogenous variables into the first and second stage of 2SLS?

The first stage of the 2SLS model is regressing each of the endogenous X's on all the Z's and W's. For the second stage, we then take the predicted values of X and fit it to our original model which also include our W's.

So why do we regress on the exogenous variables W in both stages? Since they are exogenous, isn't regressing in one of them sufficient. Could someone give a rigorous explanation?

But the trivialities aside, $W$ is included in the first stage regressors because it is exogenous and so excluding $W$ would lead to a loss in efficiency or consistency (most likely both) of the 2SLS estimator. In other words, the purpose of the first stage is to sort of "devide out" the endogenous part of the $X$'s in that $\hat X$ is the part of $X$ which can be associated solely with exogenous movements (i.e. changes in $Z$ and $W$). If $X$ and $W$ are correlated at all, not including $W$ here would result in a large loss of information since the resulting fitted values would not reflect all the exogenous movement in $X$.

This question is quite old --- however I haven't found a fully satisfactory answer online for this query, so I am adding my 2 cents. PLEASE add a comment if you notice errors!

In the case of simultaneous equations (one particular framework for thinking about endogeneity and IV), the stata documentation has a nice page about omitting exogenous variables from the first stage: stata FAQ link

However, we aren't always in the simultaneous equations framework and I wanted more intuition. Note that in Wooldridge (panel data, aka papa Wooldridge), 2nd edition, page 97, he writes:

In other words, omitting the exogenous variables in the first stage affects the consistency of the betas of interest. (standard errors will also have to be adjusted if 2SLS is run by hand in two stages).

To see why we need to include the exogenous variables in the first stage, first consider the following DAG: 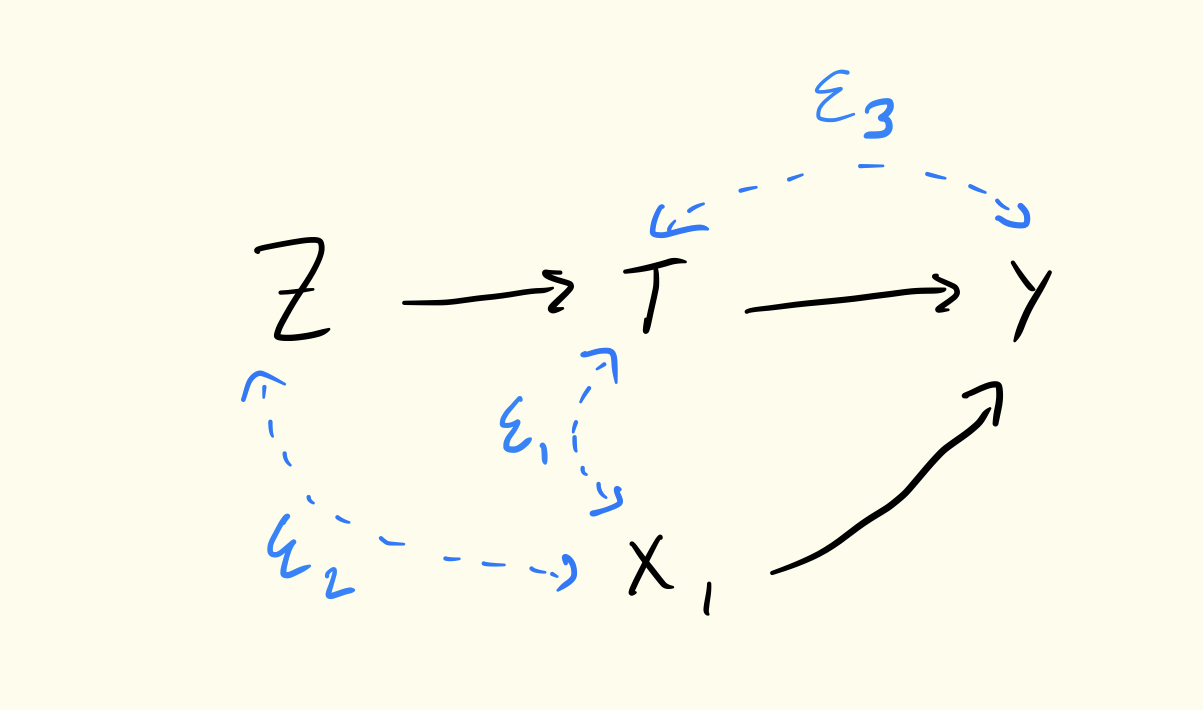 If we were to estimate this with OLS, our estimates would be biased because of the endogeneity of T and Y: $E(T \varepsilon_3 ) \ne 0$ Therefore we turn to 2SLS (IV), noting that Z satisfies the assumptions to be an instrument for T, as long as we control for X.

Generally, we can express $T = \hat{T} + u$ (For now, ignore exactly how we estimate the first stage and obtain the fitted values $\hat{T}$.)

From the original setup, $X$ is independent of $\varepsilon_3$.

If you are still confused I'd encourage you to simulate data based on the DAG, run 2SLS for both cases and check correlations to confirm the conclusions in my answer.

Not the answer you're looking for? Browse other questions tagged regression least-squares 2sls or ask your own question.

2
Omitting exogenous variables from first stage regression 2SLS - fixed effects, lagged Y variables
0
What is the effect of an omitted variable in the first stage of an IV/2SLS

0
First stage of TSLS and the matrix of instruments W
5
2SLS - logit/probit in the second stage?
0
2sls - instrumental variables mean and variance of exogenous variable
4
How does IV 2SLS obtain a causal coefficient?
5
2SLS and Control Functions (identity of estimator)
1
Non-statistically significant effect of the instrument in the reduced form of the 2SLS