I'm trying to understand the use of logistic regression in 2x2 and Ix2 contingency tables. For instance, using this as an example

What is the difference between using chi-square test and using logistic regression? What about a table with multiple nominal factors (Ix2 table) like this: 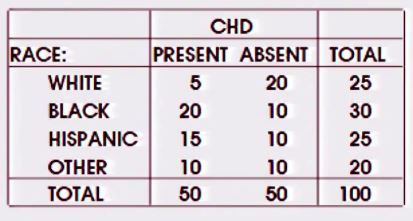 There is a similar question here - but the answer is mainly that chi-square can handle mxn tables, but my question is what is specificalyl for when there is a binary outcome and a single nominal factor. (The linked thread also refers to this thread, but this is regarding mutiple variables/factors).

If it's just a single factor (i.e. no need to control for other variables) with a binary response, what is the purpose difference of doing logistic regression?

Ultimately, it's apples and oranges.

Logistic regression is a way to model a nominal variable as a probabilistic outcome of one or more other variables. Fitting a logistic-regression model might be followed up with testing whether the model coefficients are significantly different from 0, computing confidence intervals for the coefficients, or examining how well the model can predict new observations.

The χ² test of independence is a specific significance test that tests the null hypothesis that two nominal variables are independent.

Whether you should use logistic regression or a χ² test depends on the question you want to answer. For example, a χ² test could check whether it is unreasonable to believe that a person's registered political party is independent of their race, whereas logistic regression could compute the probability that a person with a given race, age, and gender belongs to each political party.

Not the answer you're looking for? Browse other questions tagged logistic chi-squared logit contingency-tables or ask your own question.

41
Why do my p-values differ between logistic regression output, chi-squared test, and the confidence interval for the OR?
6
Different results by using chi square test and logistic regression
2
Why use chi-square (or other) statistic over regression modeling for 2x2 contingency tables?
-1
What test should I run to show if there is a correlation between two binary variables?