Multivariate Bayesian Testing with an F-test

In Bayesian statistics a standard way to perform a Lindley significance test for the hypothesis $\theta=\theta_0$, where $\theta_0$ is the suggested value for $\theta$ at the $\alpha$ level of significane would be to construct an interval such that $Pr(c_l<\theta<c_h |Y)=1-\alpha$. Then if the value $\theta_0$ falls into the interval $[c_l,c_h]$ we accept, we otherwise we reject. However, as soon as we are in the multivariate case I struggle with finding the correct representation of the credible regions. Assume the standard linear regression model $=X\beta+\epsilon$ with conjugate conditional uninformed prior for $\beta$ and $\sigma^2$ and gaussian likelihood. This results in a multivariate student-t marginal posterior distribution for $\beta$: $$\beta|Y \sim t_N (\hat{\beta},\overline{\Sigma},T)$$ with parameters for example defined in this question. Lets assume I want to investigate the hypothesis that $\beta=\beta_0$ in this case. I understand that I can perform a Bayesian F-test by computing: $$\zeta=\frac{1}{N-1}(\hat{\beta}-\beta_0)'\hat{\Sigma}^{-1}(\hat{\beta}-\beta_0)$$ Now I can check whether $\zeta$ is smaller than the $1-\alpha$ quantile of the $F(N,T)$ distribution. If this is the case the null hypothesis is not rejected.

Is this way correct? Why can I do not compute credible regions for each of the elements of $\beta$ individually and reject the $H_0$ if one of the elements $\beta_{0,i}$ falls outside the region? To me this sounds more straightforward, but I do not find the argument that proofs me wrong. Looking forward to each and every comment. 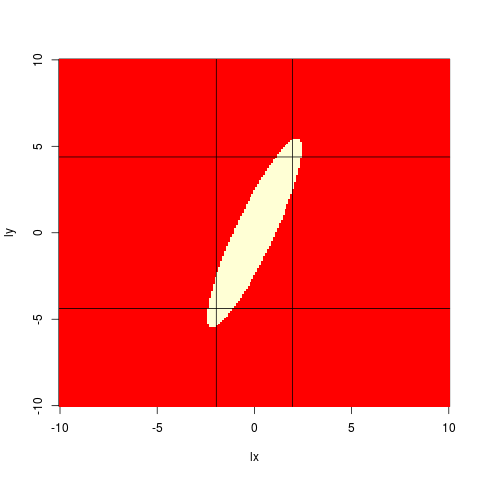 as you can see the overlap between the delineated regions is only partial.

Then, concerning the strategy you proposed for the multivariate case, maybe I missed some points but I am a bit lost. But as you mentioned it at the beginning of your question you can simply check whether $\beta_0$ lies into the region of highest probability covering $1-\alpha$% of the multivariate density. This can be done using simulation with a pretty good accuracy if $dim(\beta)$ is not to large.

Not the answer you're looking for? Browse other questions tagged hypothesis-testing bayesian regression-coefficients f-test or ask your own question.

4
Posterior of the linear regression model with g-Prior