Why after including lags do seasonal dummies become significant?

I am trying to model data that clearly looks like it has seasons. However I only pick up seasonality in very small subsets of the data and only after I add in lagged variables and eliminate trend.

I first found the trend the data is best approximated by, then determined the relevant seasonal dummies (which is none), and then looked at the correlogram of my new model to determine the AR process.

Once I added in my lagged variables my trend was rendered statistically insignificant, so I took the trend out. Additionally, I thought it was weird I got no seasonality. So just on a whim I decided to to input my seasonal dummy variable after I added in my lags. And season 4 was then highly significant!

I then played around with adding in different seasons and found the model with the lowest SIC(Schwarz Information Criterion, as listed in the output below) of all the models I constructed has two lags and one seasonal dummy. 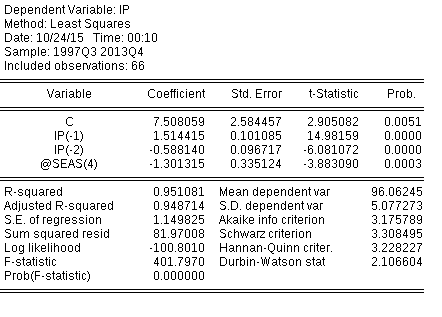 The most important question is about the role of lags in my model. Why would controlling for serial correlation first allow me to see seasonality? Does the order of controlling for certain dynamics matter? Can I control for cycles, then seasons, then trend? Or should I control these dynamics in a specific sequence?

Seasonal dummies and seasonal auto-regressive structure are often "competitors" when finding the best model. Your significant lag1 and lag2 effects often enable a clearer picture as to which approach is best i.e. seasonal dummies or seasonal memory (ARIMA) . This is why we recommend and implement a tournament approach to identifying an initial model. Care must also be taken to incorporate level shifts and/or multiple trends while dealing with Pulses. If you wish I would be glad to be more specific by actually analyzing your data. Other readers of the list might also chime in and provide productive approaches/solutions using software of their choice.

With respect to "why?" when you introduce additional significant structure you reduce the error sum of squares from the model; thus you reduce the standard errors of all estimated/non-redundant coefficients and so we often get increased levels of statistical significance.

Not the answer you're looking for? Browse other questions tagged econometrics autocorrelation seasonality lags eviews or ask your own question.

6
Coefficient changes sign when adding a variable in logistic regression

10
Calculation of seasonality indexes for complex seasonality
2
Seasonal dummies significance issues
1
What are the implications and possible explanations for an AR(7) process model?
4
What to do if ACF or PACF show significant higher lags?
1
Adding Seasonal AND annual dummies?
2
Interpreting Regression Coefficients in time series model with seasonal & trend component AND a lagged variable