I Want to see Bi-Modal Posterior in Bayesian Linear Regression!

I'm playing around with a Metropolis-Hastings MCMC algorithm as described in this post.

I made an example data set with points taken from two lines shown below. 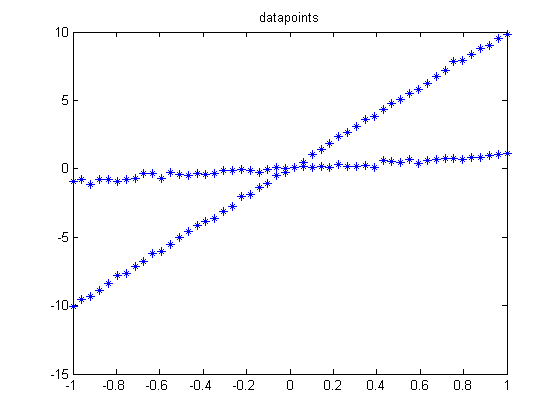 I tried computing the posterior distribution for all three parameters; slope, intercept, and standard deviation of noise. I wanted to see that the slope parameter posterior had a bi-modal distribution, with one mode at 1 and the other at 10. However, it just looked like a normal distribution with a mean around 5.

What is going on? I expected the Bayesian analysis to show that there were two values for the slope that are equally likely. I don't really see how it is more useful than least squares regression otherwise.

If you literally used the code from that post you linked to, then it's fairly clear what happened. You shouldn't expect that your posterior will be bimodal. It will be unimodal because of the likelihood which you chose. Doing the Bayesian analysis will essentially give you the same answer as running a linear regression using lm, and you can see that fitting a line through this set of points with least squares will yield the sort of result that you got!

The only way you could get a bimodel posterior is if you used a strongly bimodal prior with peaks around $1$ and $10$. Or alternatively, you should use a different likelihood (which I think is what you want to do.)

1
My MCMC do not overlap : Mixturemodel with JAGS and R