What is a very intuitive way to teach the Bayes formula to undergraduates?

I have to teach the Bayes formula to some undergraduates, in the form:

I was wondering if anyone had any really thoughtful or alternative ways of teaching it instead of the standard approach.

(I've been thinking of writing an academic paper on this topic for ages, so I'll give you the jist of what I was going to write in that paper.) Let $H$ refer to a hypothesis/theory and let $E$ refer to the observed evidence (i.e., the data). We will define the updating ratios:

(These "updating ratios" are posterior-to-prior ratios for events, so they are "updating" our beliefs based on the conditioning information.) Bayes' rule can be easily rearranged to allow it to be presented as a symmetry principle concerning these updating ratios:

This principle can be illustrated graphically by a simple diagram below. As an applied example, suppose we have a document such as an academic paper, where the author name is not available. We have a hypothesis that the writer of a document is male, and our evidence for or against this hypothesis consists of whether the writer uses "he" as a gender-neutral third-person pronoun in the document. In this case the updating ratio $\Delta(E|H)$ can be thought of as our belief about the relative ratio of use of this pronoun by males, compared to its use by the whole population, and the updating ratio $\Delta(H|E)$ is the ratio of our posterior probability for the hypothesis that the writer is male, compared to our prior belief in this hypothesis. Bayes' rule tells us that these ratios must be the same ---i.e., if we think that a male writer is $x$% more likely to use "he" as a gender-neutral third-party pronoun, compared to a general writer in the population (who could be male or female),$^\dagger$ then if we observe this pronoun usage, our posterior probability that the writer is male should be $x$% higher than our prior probability. 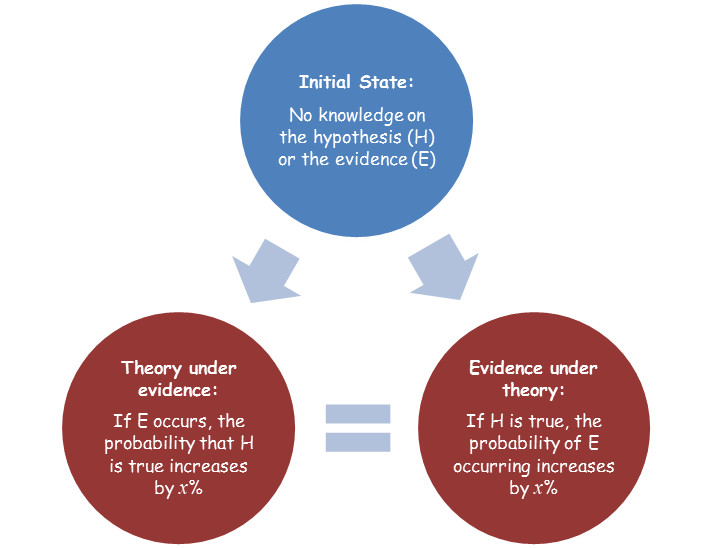 The nice thing about this form of Bayes' rule is that it gives you a simple symmetry principle, which is philosophically appealing and intuitive. The standard form of Bayes' rule is of course more useful for analysis, since it is framed in terms of standard model objects. Thus, my presentation of the above rearrangement of Bayes' rule should not be regarded as a superior form in a practical sense. However, I think this gives you a version of the rule that has a simple intuitive meaning, insofar as it allows you to present Bayes' rule as a symmetry principle that reverses hypothesis and evidence.

$^\dagger$ I am being a bit rough here; technically the updating ratio for the evidence should be done on a document-weighted basis relative to the source of the document.

It helps to disambiguate the meaning of "accuracy" more precisely like this Reddit comment, in which there's a typo: "1485" (in "out of 1485 people who test positive") ought be "1495". I rewrote it with whole numbers (rather than 0.5% as the disease rate).

Sensitivity - the odds that the test will be positive if you have the disease.

Specificity - the odds that the test will be negative if you lack the disease.

Positive predictive value - the odds that the test will correctly predict you have the disease, if you test positive.

Negative predictive value - the odds that the test will correctly predict you lack the disease, if you test negative.

In this case, this test is first-rate for determining who lacks the disease. The $\color{deepskyblue}{1970}$ who test positive can be tested to confirm they do have the disease, whereas those who tested negative need no further tests.

Not the answer you're looking for? Browse other questions tagged bayesian intuition teaching or ask your own question.

30
Strategies for teaching the sampling distribution
2
Latent Dirichlet Allocation - understanding the posterior
3
Intuitive explanation of the F-statistic formula?
8
Model with admissible estimator(s) that are not the Bayes estimator for any choice of prior?