I want to test if two samples, which follow a skewed distribution, can be distinguished from each other. A Kolmogorov-Smirnov statistic for two samples would be sufficient if there was a way to include errors. Each data point that I have has an error measurement attached to it and these errors are relatively large and vary wildly between each other.

In the following figures, I plot the histograms of two data sets each containing two samples, a red sample and a blue sample. The vertical line denotes the mean. As is visible, in both cases the two sample distributions are skewed to each other. There are around ~240 data points in each histogram for both data sets, where the red and blue sample within a data set are of the same size. The data are restricted in the range [-0.2, 0.4] and the size of the average error for each data point is 0.12 (welcome to my world!). 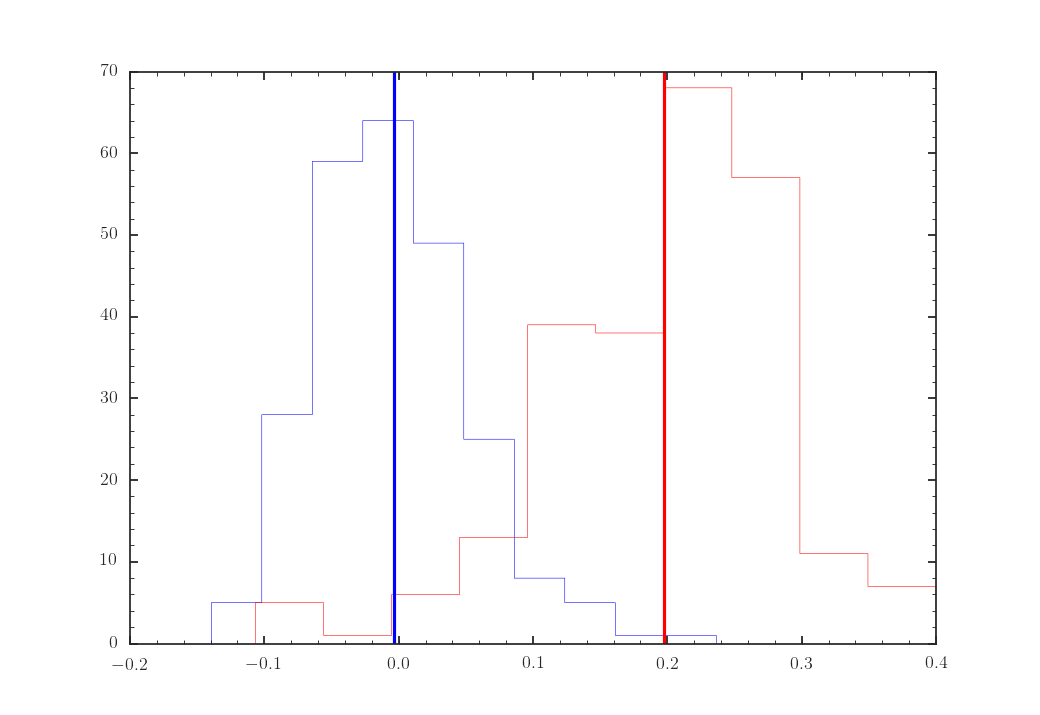 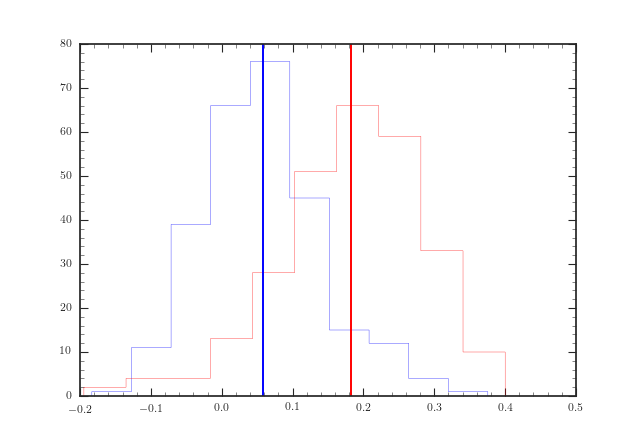 Searching the internet for a weighted Kolmogorov-Smirnov test taking into account errors unfortunately yields nothing. That is imho what I need, unless I can get some statistical reassurance that I do not need to worry on the data point errors in my case.

This is a great question, and it blows my mind that there is not an obvious answer, given that this is essentially the most fundamental statistical comparison scientists make. I came here to ask the exact same question. I don't have a full answer, but I can tell you the inelegant way I'm approaching this problem.

3) Use the distribution probability densities to come up with cumulative density functions for each sample: CDF(x)=Integral[ D(y) dy] from y=-infinity to x Do this for both samples.

4) Compare these CDFs as you would in a normal KS test. Find their max difference, D.

This D is essentially equivalent to the KS D statistic, but does it translate the same way into a probability of rejecting the null hypothesis? I think the KS test is theoretically rooted in data with single values, so I'm not sure we can certain. To get around this theoretical discomfort, we can at least check to see if your measured D value is significantly greater than any random permutation of samples composed of all the elements in your two samples.

5) Once you have your "real" D value, go back and randomly shuffle which elements are in sample 1 and which are in sample 2 (but keep the total number of elements in each sample the same as before). Repeat steps 1-4 to come up with a D value for this randomly assembled comparison of samples. Do this a few hundred or thousand times and you'll come up with a distribution of D values.

6) How does your "real" D value compare to this distribution? If it is greater than 99% (or 95% or 90%...) of them, that's a good indication your samples' distributions differ significantly more than would be expected if they truly represented the same underlying distribution.

Since this is such an important and basic scientific question, part of me assumes that there just MUST be a theoretically-grounded approach to it. So far I haven't found it.

The K-S test compares two probability density functions (see e.g. Wikipedia). To my knowledge, it is not meant to compare measurements with errors.

One way to approach your problem is perhaps to fit an ensemble of PDF models to your data, for instance using a Monte Carlo approach to sample sensible model parameters. This leads to two sets of models, one set for each of your distributions. Then use the K-S test to compare all models in one set to all models in the other set. You can then study the resulting set of K-S statistics, for instance by looking at its distribution, or by just taking the average and variance. This way you are back to one K-S statistic and an error on that value.

Whether this is solid statistics, I wouldn't dare to say.

Not the answer you're looking for? Browse other questions tagged distributions error sample skewness kolmogorov-smirnov-test or ask your own question.