Short answer: Yes, in a probabilistic way. It is possible to show that, given any distance $\epsilon>0$, any finite subset $\{x_1,…,x_m\}$ of the sample space and any prescribed ‘tolerance’ $\delta>0$, for suitably large sample sizes we can be sure that the probability that there is a sample point within a distance $\epsilon$ of $x_i$ is $>1-\delta$ for all $i=1,…,m$.

Long answer: I am not aware of any directly relevant citation (but see below). Most of the literature on Latin Hypercube Sampling (LHS) relates to its variance reduction properties. The other issue is, what does it mean to say that the sample size tends to $\infty$? For simple IID random sampling, a sample of size $n$ can be obtained from a sample of size $n-1$ by appending a further independent sample. For LHS I don't think you can do this as the number of samples is specified in advance as part of the procedure. So it appears that you would have to take a succession of independent LHS samples of size $1,2,3,...$.

Now consider the case that the samples $X_n$ are obtained by LHS. Theorem 10.1 in these notes states that the members of the sample $X_n$ are all distributed as $U([0,1)^d)$. However, the permutations used in the definition of LHS (although independent for different dimensions) induce some dependence between the members of the sample ($X_{nk}, k\leq n$), so it is less obvious that the asymptotic density property holds.

This proves asymptotic density (as defined above) for both iid random sampling and LHS. Informally, this means that given any $\epsilon$ and any $x$ in the sampling space, the probability that the sample gets to within $\epsilon$ of $x$ can be made as close to 1 as you please by choosing the sample size sufficiently large. It is easy to extend the concept of asymptotic density so as to apply to finite subsets of the sample space - by applying what we already know to each point in the finite subset. More formally, this means that we can show: for any $\epsilon>0$ and any finite subset $\{x_1,...,x_m\}$ of the sample space, $min_{1\leq j\leq m} P(min_{1\leq k\leq n} \|X_{nk}-x_j\|\lt \epsilon)\to 1$ (as $n\to\infty$).

I'm not sure if this is quite what you want, but here goes.

You're LHS-sampling $n$ points from $[0,1)^d$, say. We'll argue very informally that, for any $\epsilon>0$, the expected number of empty (hyper)cuboids of size $\epsilon$ in each dimension goes to zero as $n\to\infty$.

Let $m=\lceil 2/\epsilon \rceil$ so that if we divide $[0,1)^d$ uniformly into $m^d$ tiny cuboids -- microcuboids, say -- of width $1/m$ then every width-$\epsilon$ cuboid contains at least one microcuboid. So if we can show that the expected number of unsampled microcuboids is zero, in the limit as $n\to\infty$, then we're done. (Note that our microcuboids are arranged on a regular grid, but the $\epsilon$-cuboids can be in any position.) 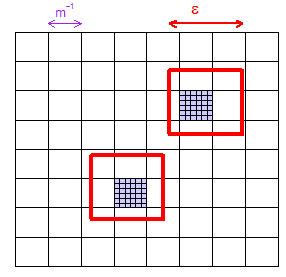 (3) Now think about the number of sample points $n>m$. I've illustrated $n=6m$ in the picture. LHS works in a fine mesh of these super-tiny $n^{-1}\times n^{-1}$ sized "nanocuboids" (if you will), not the larger $m^{-1}\times m^{-1}$ sized "microcuboids", but actually that's not important in the proof. The proof only needs the slightly hand-waving statement that it gets gradually harder, on average, to keep missing a given microcuboid as you throw down more points. So it was a probability of $1-m^{-d}$ for the first LHS point missing, but less than $(1-m^{-d})^n$ for all $n$ of them missing: that's zero in the limit as $n\to\infty$.

(4) All these epsilons are fine for a proof but aren't great for your intuition. So here are a couple of pictures illustrating $n=10$ and $n=50$ sample points, with the largest empty rectangular area highlighted. (The grid is the LHS sampling grid -- the "nanocuboids" referred to earlier.) It should be "obvious" (in some vague intuitive sense) that the largest empty area will shrink to arbitrarily small size as the number of sample points $n\to\infty$.