Analyze count data that does not fit glm - Overdispersion

I am working with camera-trap data on mammals. My data looks like this:

There are ten species in total. I want to compare detection rate between zones and phases, as this is a BACI experiment. Detection rate is measured as the number of observations of a given species divided by effort; effort = camera days. so essentially, detection rate = average for the entire dataset for each species).

I have separated the data by phase, then analyze using a glm. However, even with the most abundant species, the model fails the goodness of fit test. Here is an example of the code I'm using:

There are a LOT of zero's in my data (histogram included below). After trying the species with the top three detection rates, p=0 in every case, indicating lack of fit with the model. 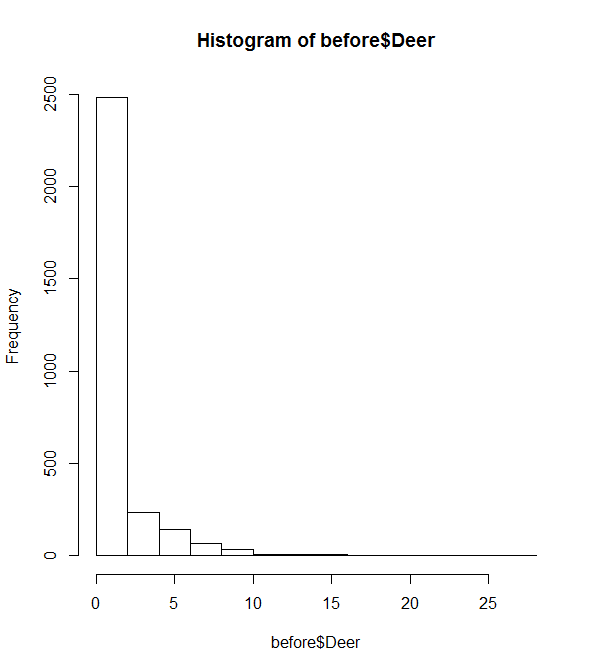 Is there another way I can compensate for overdispersion in my data? Or is there a different model which I should use for this type of data?

I also ran the analysis using an anova followed by a Tukey test from the raw data (as shown below), but then remembered that I would need to use a Poisson distribution for this data. While we're here, I want to verify that this is an incorrect way to analyze the data - thoughts?

Thank you in advance for your help.

It looks like you don't necessarily have overdispersion in general, but a specific kind of overdispersion, namely too many zeros.

Whether one or the other model is more appropriate should depend on just where your overabundance of zeros comes from. Think about your data generating process.

Not the answer you're looking for? Browse other questions tagged anova generalized-linear-model poisson-distribution goodness-of-fit overdispersion or ask your own question.

62
How are regression, the t-test, and the ANOVA all versions of the general linear model?
14
Identical coefficients estimated in Poisson vs Quasi-Poisson model
4
Why do I get the same output with Poisson GLM vs quasi-Poisson GLM?